The winning entry in the 1963 Gown of the Year competition, this ball gown is a sumptuous creation of French guipure lace embroidered with silk ribbon and hand-beaded with pearl crystals and French paillettes. Designed by Lorna White for local fashion house Hartnell of Melbourne, the dress represents a key point in Australian fashion history and tells a story of the age-old battle of art versus commerce.

The Melbourne fashion industry of the 1950s

With the shadow of war receding, Melbourne was booming economically and the fashion business was now highly profitable. Imported European goods were highly valued, along with fine quality local design and manufacture. Social events had formalised dress codes, reflecting social values and an increased breadth of affluence across society. With the advent of television and suburban growth came an increased emphasis on home improvement, entertaining, and demonstrating one’s social position.

Flinders Lane and Collins Street were the throbbing heart of the garment and textile industry, with many businesses owned by a tight-knit group of European families, including numerous post-war migrants who brought their own skills and aesthetic to the developing Australian fashion industry.

Among these was Melbourne-born Ralph Samuel.  Ralph had trained a jeweller prior to serving in the Second World War, and upon returning home in 1945 he joined his father-in-law Joseph Slonim’s textile business, establishing the fashion house Hartnell of Melbourne.  Ralph’s passion was designing high-fashion evening gowns inspired by Hollywood goddesses and European high society, but early on his ambitions were stifled by a post-war shortage of luxury fabrics and strict government quotas on textile imports. 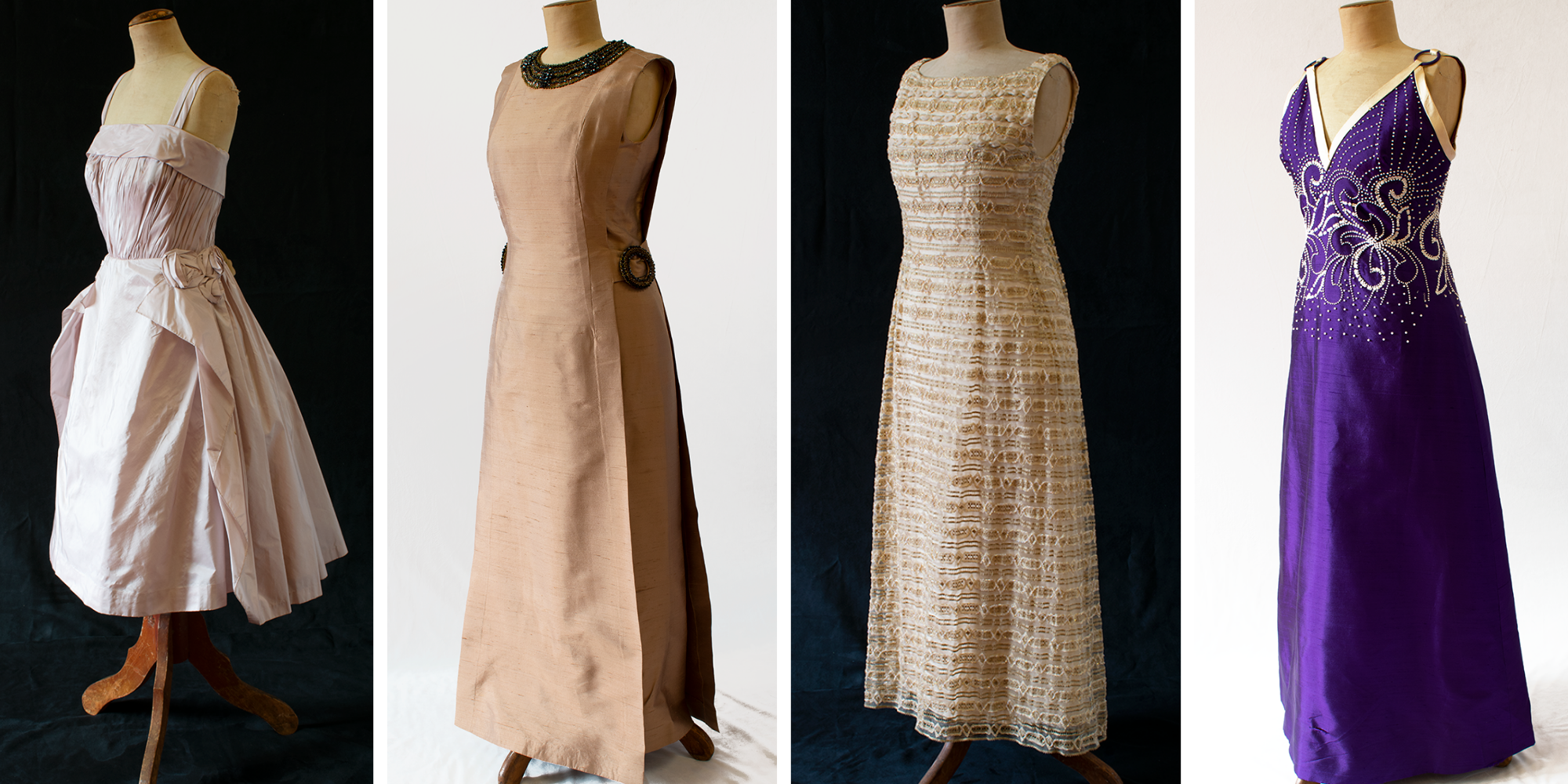 Opportunity came in the guise of adversity when, in 1952, a large fire broke out in Hartnell’s Flinders Lane workshop, resulting in 250,000 pounds worth of damage. Struggling to replace his lost textiles, Ralph had the idea to apply for a quota exemption, enabling him to buy the fabric he needed from Europe.  He was approved, and in the process became one of the few local clothing manufacturers on the market with access to large amounts of top quality imported textiles.  Ralph seized this advantage to establish Hartnell as a premium haute couture brand, using silks and laces from Europe’s best fabric houses. 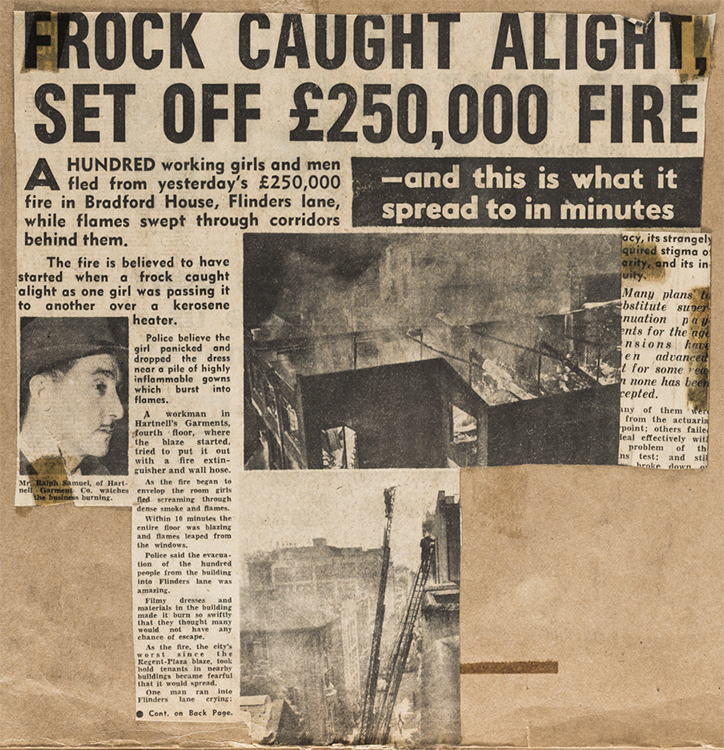 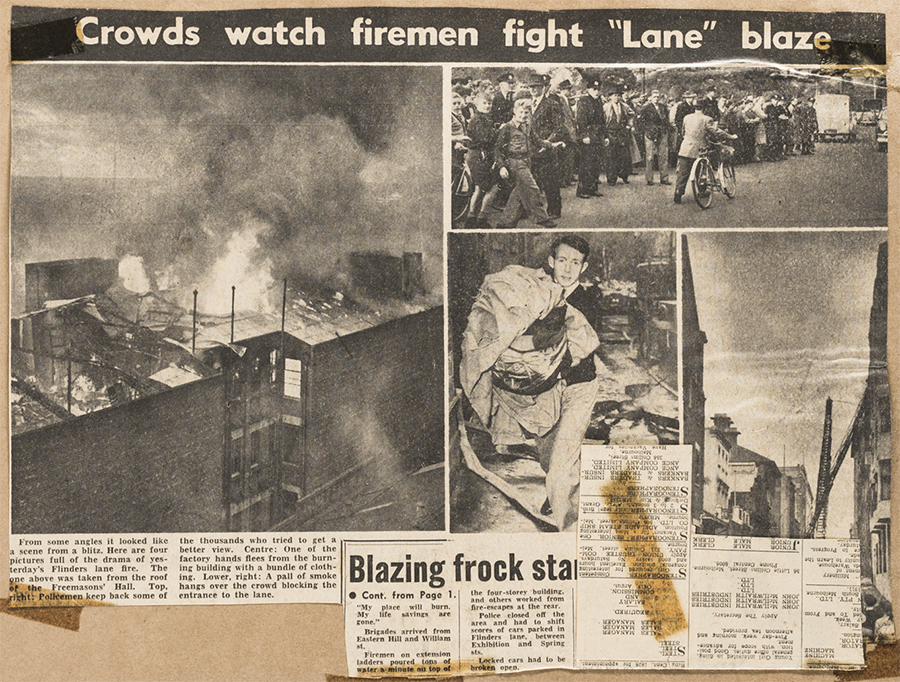 The Gown of the Year

The following year, 1953, marked the inaugural Gown of the Year competition.  Organised by the Australian Mannequins and Models Guild, the Gown of the Year quickly became an important event in Melbourne’s social calendar. It offered models an opportunity to hone their craft, designers and makers to stretch their creative and technical talents, and businesses an opportunity to build new markets.

Throughout its 54-year history, the competition withstood many changes and controversies. Ultimately it was subject to the market forces of the time, with the 1963 Hartnell of Melbourne gown marking a pivotal moment in the story of both the competition and the Melbourne fashion industry. 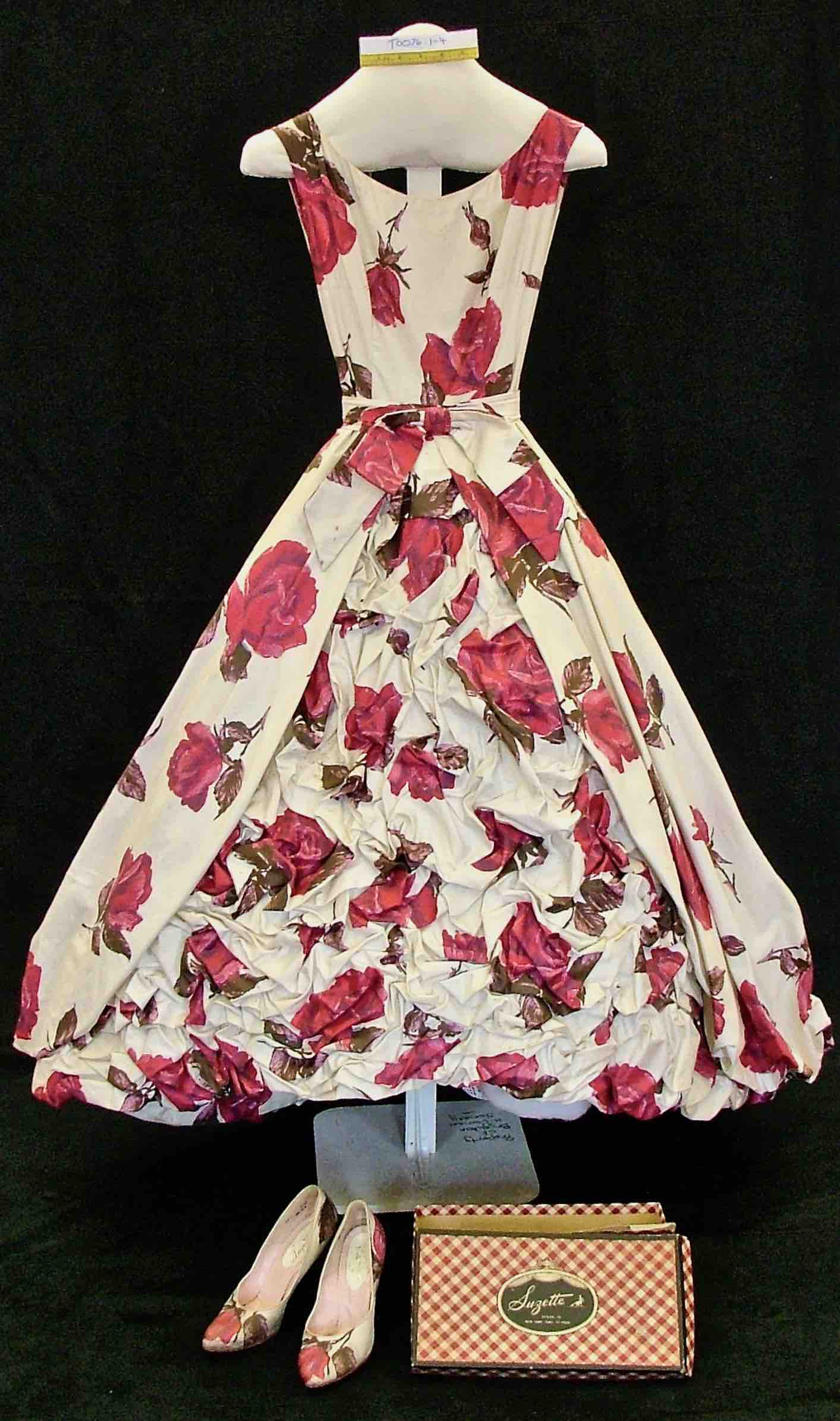 Brighton local Margaret Cooke had this dress made for the 1958 Miss Summer Festival competition fundraiser. She took inspiration from a Women’s Weekly article featuring photos of Gown of the Year entrants. 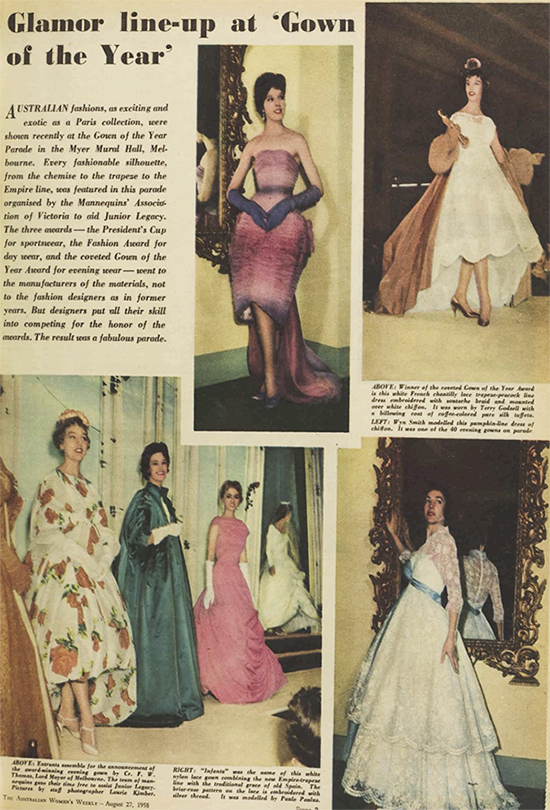 In the early years of the competition, couture houses, textile mills and models collaborated to create and show spectacular gowns.  However, over time differing motivations led to clashes and disagreements.  For businesses, entry was an opportunity to put the quality of their garments and designs on show with a view to gaining prestige and increasing commercial sales. Flush with the wealth of the post-war boom, they would invest substantial resources in producing a single dress.

On the other hand, many in the Mannequins and Models Guild saw the purpose of the competition as rewarding technical and creative excellence. They believed that the gowns should be judged primarily upon creativity and ingenuity, and were frustrated by the lavish amounts of money and resources being spent on the competition, believing it led to an unequal playing field. Dress design, they felt, had become a servant to the fabric. 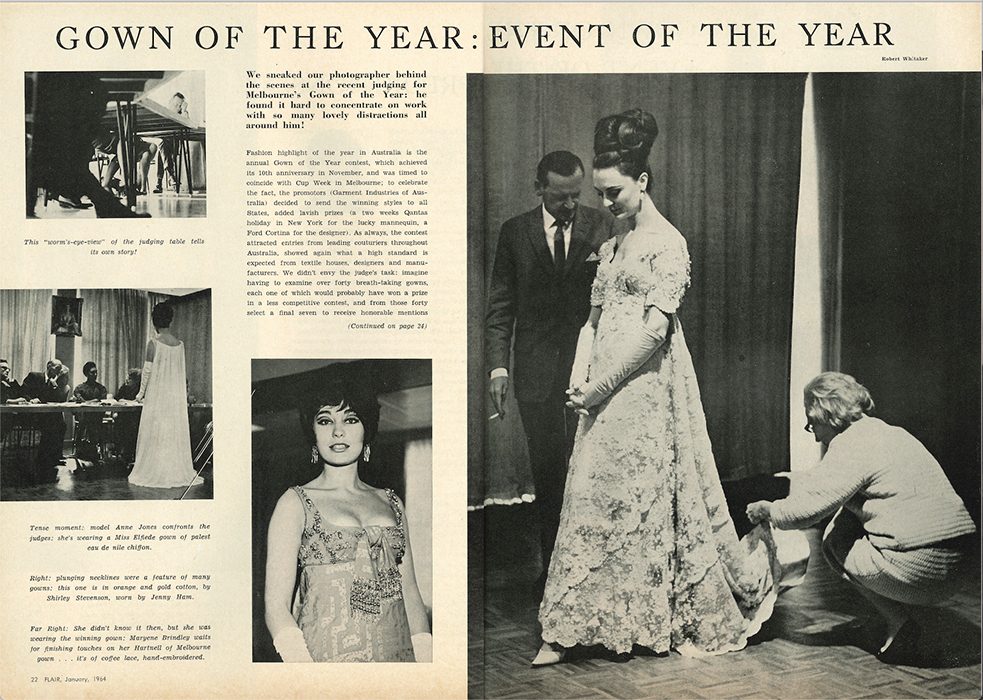 Hartnell and Gown of the Year

In 1963 Hartnell of Melbourne entered this stunning gown, given the name ‘Directoire’. Designed by Lorna White to showcase a beautiful expensive imported lace from Marescot of Paris, it features intricate beadwork and superb workmanship. The judges remarked with delight at their difficulty in identifying the placement of the zip, which had been artfully concealed by overlapping lace segments. The dress reputedly took 300 hours to construct, with work beginning only four weeks before the ceremony.  The finished product weighed 6 kilograms and cost an estimated 3000 pounds, an enormous financial outlay at the time.

Such lavish creations had been common for Melbourne couture houses during the late 1950s and early 1960s.  But by 1963, the industry was approaching a tipping point.

A new generation was now coming of age, young people with no interest in dressing like their parents, and a new set of designers was rising to meet the demand with fresh, modern and affordable styles.  Established fashion houses that had previously been secure in their dominance were now under pressure to adapt to a vastly different landscape.

Between the changing fashion market, tightening competition and rising manufacturing costs, Flinders Lane businesses were forced to think pragmatically.  Most came to the conclusion that the Gown of the Year competition no longer made good commercial sense: for all the visibility it brought them, they could no longer justify spending hundreds of pounds creating a single dress that would not necessarily sell.  1963 was the last year most Flinders Lane fashion houses would participate in the competition. 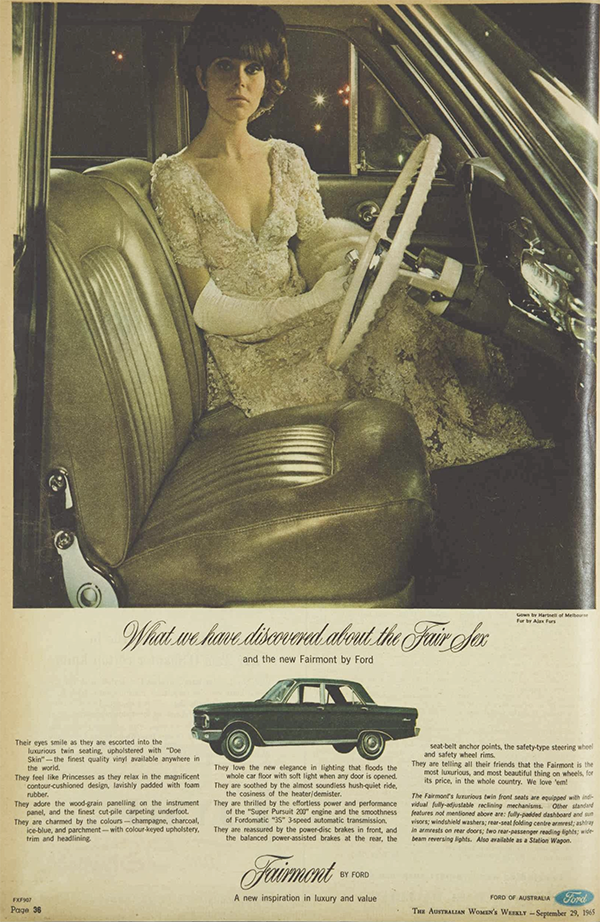 Ford Fairmont advertisement, Women’s Weekly, 29 September 1965, featuring Hartnell of Melbourne’s 1963 Gown of the Year. While the competition gave Hartnell opportunities for exposure, such as this one, it did not necessarily lead to more commercial sales.

At Hartnell of Melbourne, Ralph Samuel recognised the need to shift with the times and embrace the emerging youth market, along with the importance of fostering young design talent. In addition to his own youth labels such as Miss Hartnell, helmed by his son Brian and designer Christine Hooker, he housed influential young designers such as Felicity Fitchett and others within Hartnell House.

From 1964, the Gown of the Year competition moved in a new direction. The next few years were characterised by an increased emphasis on innovative use of inexpensive materials, such as wool and new synthetics, and novel modern design. Art and creativity were prioritised over commercial outcomes. This move was in line with a fashion industry and society that were evolving, with growing interest in youth style and ready-to-wear, high street fashion.

We can see this progression in another Gown of the Year entrant in the Brighton Historical Society collection.  Commissioned by the Australian Wool Board in 1966, it was designed by the Melbourne fashion house Jinoel and echoes in style the old-school glamour of earlier years, but takes a more experimental approach in its unconventional use of wool lace. 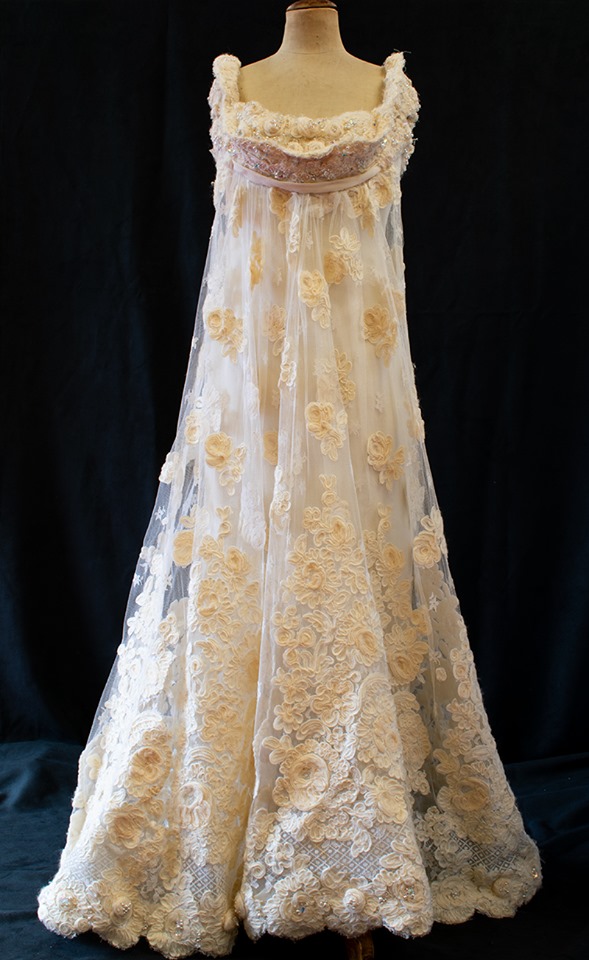 By 1969 the competition had firmly entered a new era, turning its focus to fostering  rising, innovative talent and providing opportunities to students and non-professionals designers and makers. The tone of designs was young, fresh and modern, with appreciation for unusual fabric treatments, hand beading and fashionable shapes.  This winning John Claringbold entry of 1969 is an excellent marker of the new direction of both the competition and the Australian fashion aesthetic. Its reported cost? Seven dollars.

In the age-old battle or art versus commerce, ultimately neither side is right or wrong.

Ralph Samuel and his colleagues’ commercially-motivated investment in the early Gown of the Year competition enabled the creation of intricate and beautiful garments like Hartnell’s 1963 gown, which remains a superb example of design and workmanship. After business trends led them to part ways with the competition, they went on to build a retail landscape of affordable, high quality and attractive clothing for everyday people.

Meanwhile, the Gown of the Year  remained as a forum for creative exploration and boundary-pushing, away from the constraints of commercial necessity.  From its early days until its last, the competition provided a platform for many designers who became household names, including but not limited to: Hall Ludlow, Henry Haskin, Dame Zara Holt of Magg, Charlotte Blau (Charlotte of Fifth Avenue), Van Roth, Jinoel, House of Nefertiti, Aldo Terlato, and J’Aton designers Anthony Pittorino and Jacob Luppino.

Art and commerce: both vital ingredients in shaping the Australian fashion landscape we know today.

Valenta, Tom, Remember Me, Mrs V?: Caring for My Wife: Her Alzheimer’s and Others’ Stories, Michelle Anderson, South Yarra, 2007.

Thanks to Tom McEvoy, fashion historian and RMIT Masters student, for sharing his both his knowledge and image collection; to the staff of the Jewish Museum of Australia for providing access to their Hartnell of Melbourne collection; and to Helen Gigliuto and Brian Samuel for generously sharing their knowledge and recollections.