Unfortunately by the time you are reading this, the exhibition will be over!  Ah well. Due to other commitments both professional and personal I have not managed to get this post published in a timely manner. Never mind.

Diane Masters, a popular mannequin (model) of the day gave a lovely floor talk where she shared some of her very fond memories of the time. I was particularly struck by the stories she told of her good friend Hall Ludlow and the journey his life took from abandonment in an orphanage, through menial service jobs to creating his own fantastic career as a couturier. Over here you can read more from Diane Masters on Hall Ludlow. 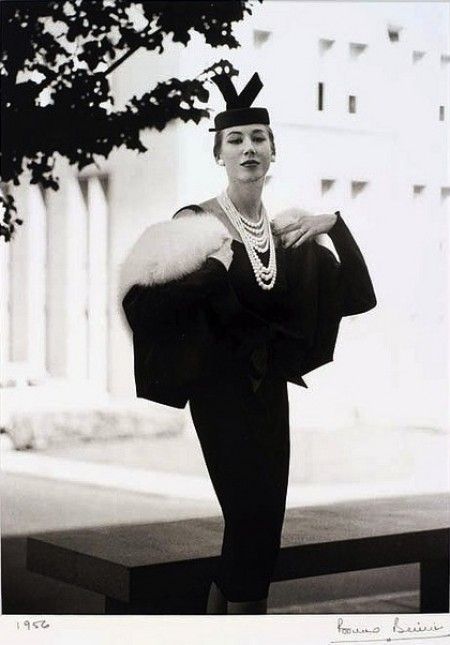 Diane Masters in Hall Ludlow in 1956 Photographed by Bruno Benini.

Nicole Jenkins also spoke which reports tell me was also fascinating. Sadly I could not attend that event as I believe that Nicole is a veritable fountain of knowledge.

The following pieces were selected by the Glen Eira curator, Diane Soumilas, from the BHS collection for inclusion  in the exhibition. With each piece I have included some notes and links that I have recently sourced, just the beginnings of research that might help anyone looking to learn more information about these labels.This collection is important to me as I am fascinated by the snapshot it provides of one particular community, as well as contributing to our broader social history in exhibitions such as this. It holds some interesting pieces which I hope to illustrate to you here. Further research is definitely required for full histories of items and makers.

A rather smart black raffia and diamante hat. Whilst the hat appears to be of Irish origin, as with all of our non provenanced items its presence in the collection suggests that it was owned and worn by a resident of the Brighton area. 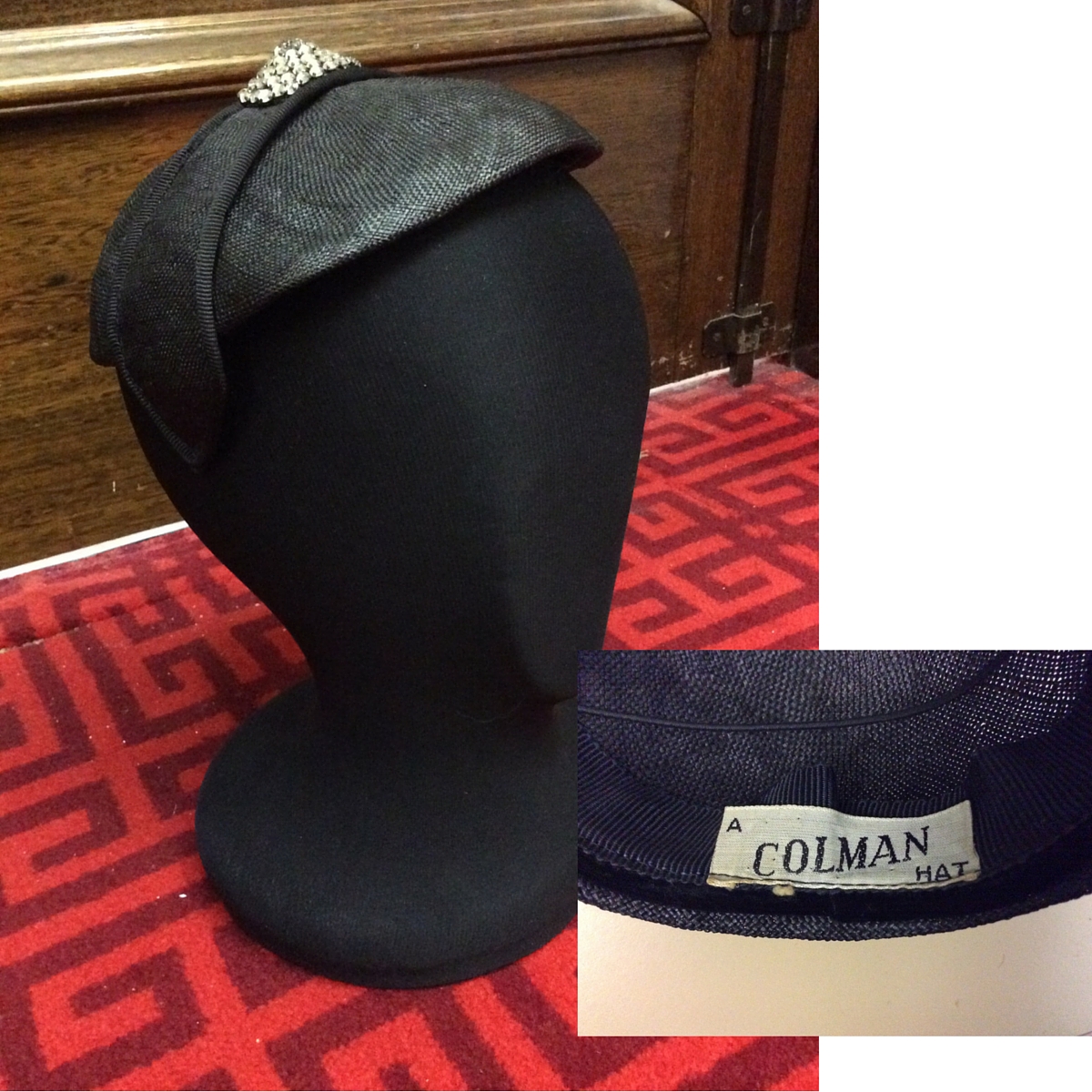 A Colman Hat – An item of unknown provence believed to have been made by Fisher’s of Cooktown, Northern Ireland.

With no real maker information to go on and judging purely by style I estimate this piece to have been made in the early 1950’s.

I have been in at the society today putting away returns and in the process discovered two hats that have put a different perspective on things. 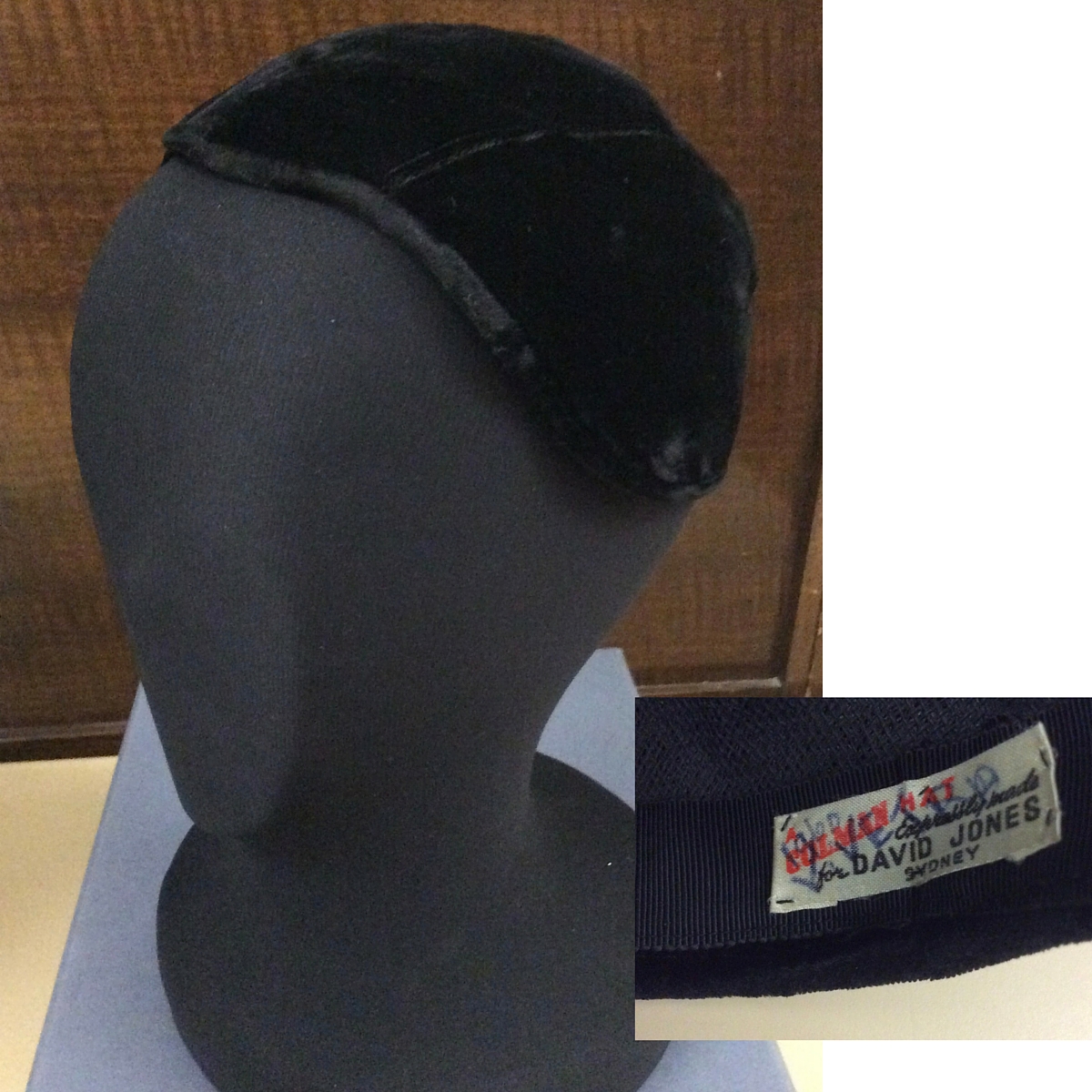 The way this hat is labelled indicates to me that potentially Colman hats may have been made especially for David Jones, Sydney for the local market. The first Colman hat may have similar provenance. Some unknown person has written 1960 and V. Vetra on the label  which I suspect may have happened when it was initially donated to the society. 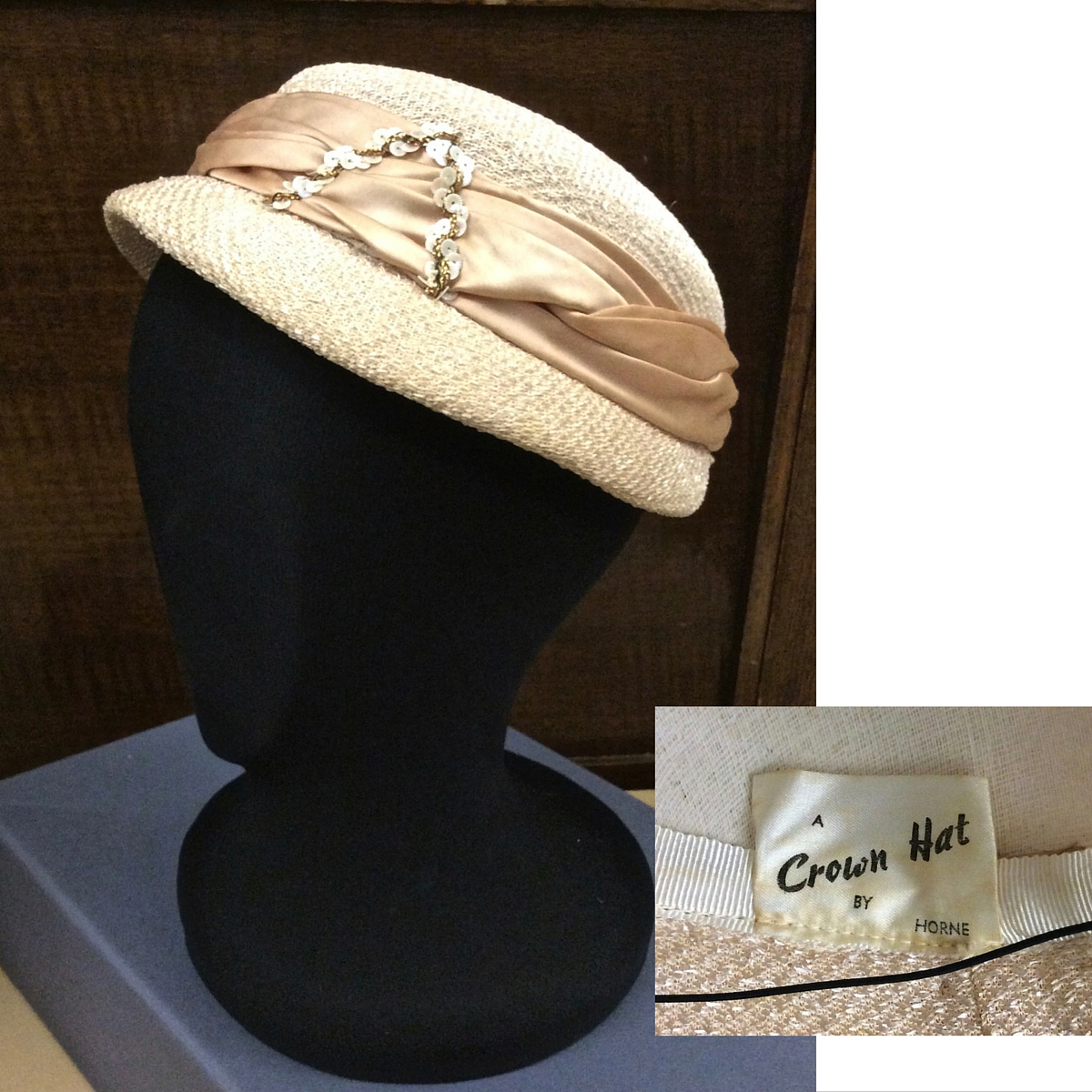 This hat has been labelled in a similar fashion. The only Horne I have found thus far is an American brand from the 1930’s in Pittsburg. I remain curious as to why this hat is labelled this way. Would love to hear from anyone who can fill me in further!

This sweet little floral piece is believed to have been made by Harbig Products of Melbourne. I have not yet unearthed any information to explain the use of the words New York and Paris on the label and would be fascinated to hear if more! Although I did find this news report

News of next winter hat fashions was brought back by Melbourne manufacturers, Mr. and Mrs. Richard Harbig, when they returned by B.C.P.A. DC6 last night after four months in America and the Continent studying materials that will be needed for next season’s hats. They predicted: Shapes: Head-hugging cloches to suit short hair, cut away at the back to clear high collars, and built up and out at the front to give height. Materials! Felts, velours, velvets, and a new long-haired fur fabric, flamond. Colours: Muted pastels, few jewel shades, and no vivid colours. Trimmings: Little veiling, hut feathers and feathers and feathers.

that at least indicates that the Harbig’s were spending substantial amounts of time abroad. It is both head hugging and muted pastel and I therefore I feel we can safely date it to c1950. 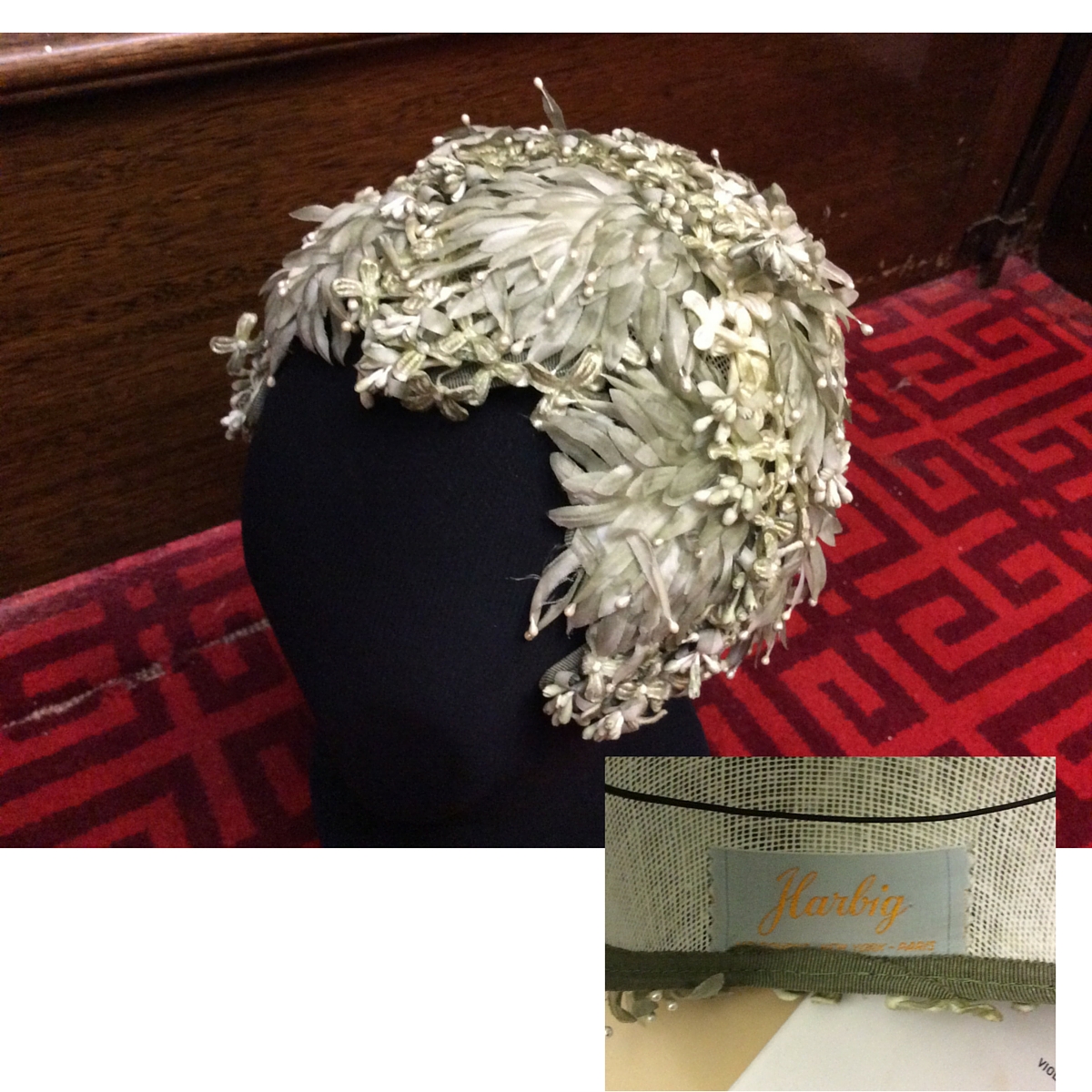 I also found these job advertisements for positions at Harbigs, which I find interesting. These professions exist these days in such a completely different manner. In the past you could make a career in a millinery factory in Melbourne. Today most milliners in Australia are skilled artisans working alone or in very small companies, often working across a variety of fields including teaching, fashion, and costume industries.  My maternal grand mother was a milliner, finding these job advertisements has had me thinking about finding out more about her professional experiences.

This ad from  The Age July 5th 1961 advertisers for urgently required experienced milliners to do work from home.

This dashing black silk velvet and straw hat is by Hicks Atkinson and Sons, Pty Ltd, Collins St, Melbourne. Hicks Atkinson Department Store operated from 1911 until 1963 and both retailed the designs of others as well as commissioning exclusive product. This store was in operation at the time when department stores were at the height of their popularity and this part of Melbourne was a shopping hub with a substantial number of luxury stores. 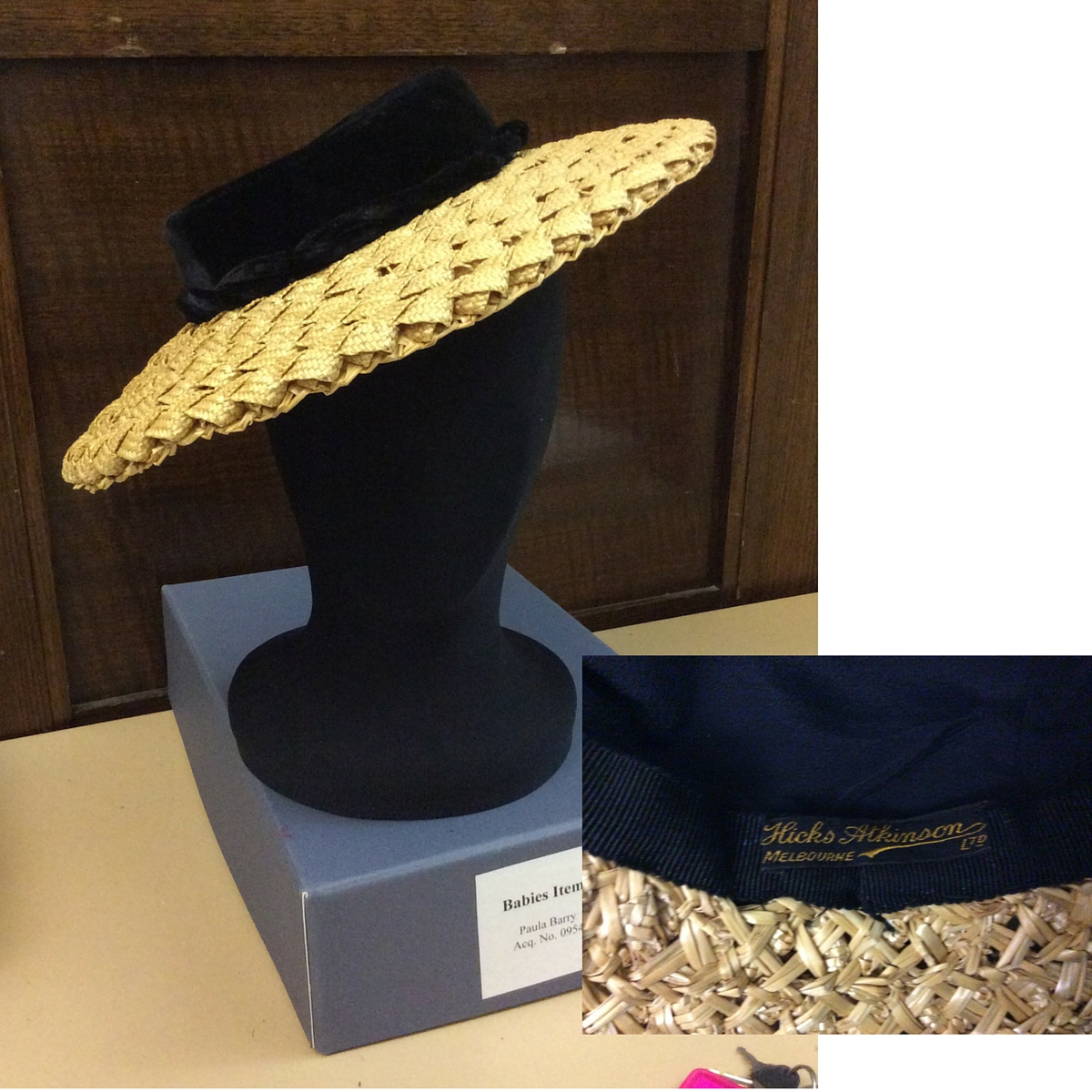 Hicks Atkinson: Melbourne. An item of unknown provenance from the Brighton Historical Society Collection. Hicks Atkinson was at one stage located at 348 – 350 Collins Street, Melbourne. 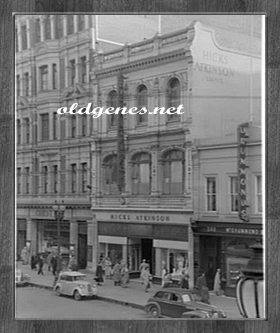 Hicks Atkinson Collins St Store. Taken from an article on oldgenes.net featuring the personal story of Winifred Easter Fasham who worked at Hicks Atkinson in the Millinery showroom and as a buyer. Click the image to go to the article.

Judging by its style this piece is most likely to have been made in the early to mid 1950’s.

A silk velvet and net leaf hat. Unfortunately I have not been able thus far to find any further information regarding this milliner. My assumption is that she may have been a small artisan or couturier milliner, with a smaller less established business. I would love to hear from anyone who could offer me any information regarding her. 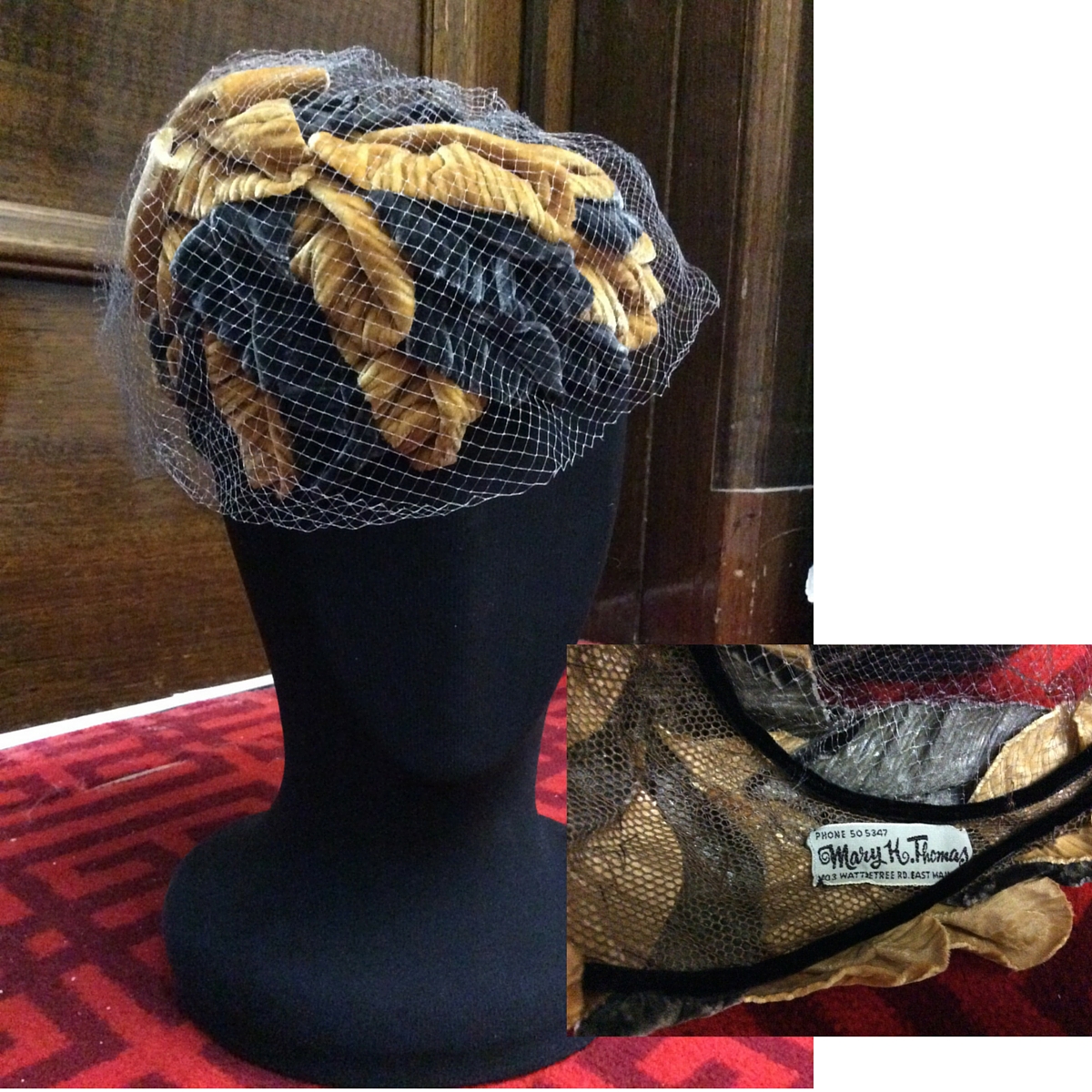 A frothy concoction of net, wire and paper featured above is a hat bearing the label Nance Bannon. 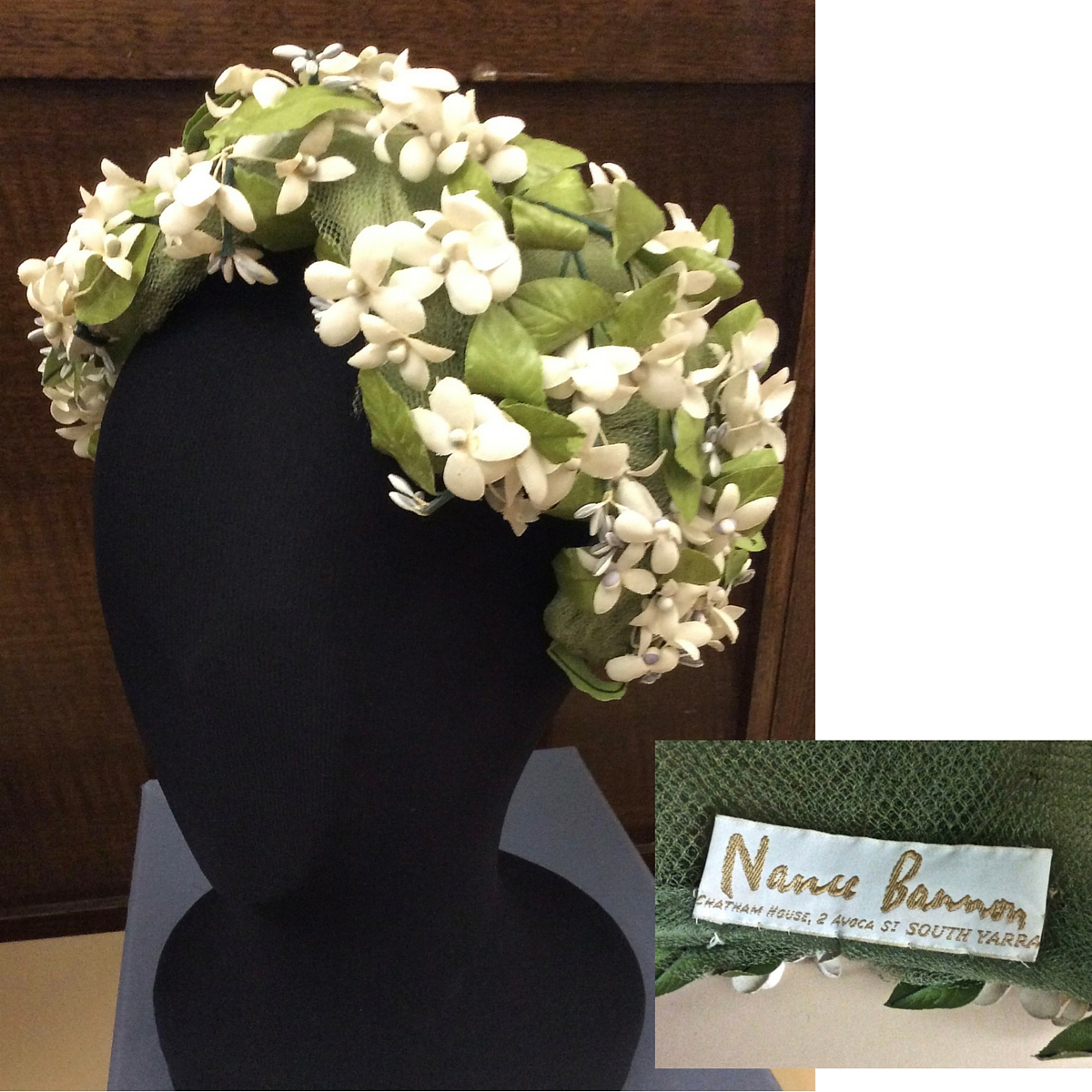 In my investigations online I have found a number of references to a society lady Miss Nance Bannon with dates in the mid 1930’s. One of these was on Trove, The National Library of Australia’s digital resource. Trove has a number of newspaper articles featuring promotions of Nance Bannon’s millinery from the newspapers similar to the ones I have linked to below. As yet I am not sure if this society lady in the mid 1930’s is the same Nance Bannon as the 1950’s and on milliner but it seems likely. Miss Nance Bannon is third from the left in the central photograph.

Table Talk Newspaper (Melbourne Victoria 1885 – 1839) Nance Bannon The Birdcage Aug 1st 1935 ‘Out at Moonee Valley’ Click the image to go through to the item on Trove.

Trove has numerous 1950’s digitised newspapers featuring ‘advertorial’ for Nance Bannon and her millinery. Articles from both South Australian and Victorian newspapers are featured. It would appear that whilst she was based in Melbourne she may have regularly travelled to Adelaide to show her wares.

Over here you can find two ads from The Age Melbourne Saturday Jan 14 1956 in which Nance Bannon advertises millinery positions: .

This second job description seems quite baffling! I suspect the ad is supposed to read “millinery improvers and apprentice”?

These ads indicate that in 1956 Nance Bannon appears to have been located at 174 Collins St Melbourne.

In this Age newspaper story in 1961 featuring three Autumn / Winter collection hats and again in this story in 1966, in The Age newspaper that features from August 3rd 1966 of four hats from Nance Bannon’s spring collection indicates that she is now located in South Yarra .

In this Age newspaper story from August 9th 1967 we see Nance Bannon featured again (my, she was popular).

From looking at the styles of these hats, the dates of her work, and her business address I estimate  this hat to be c 1956 – 1961. 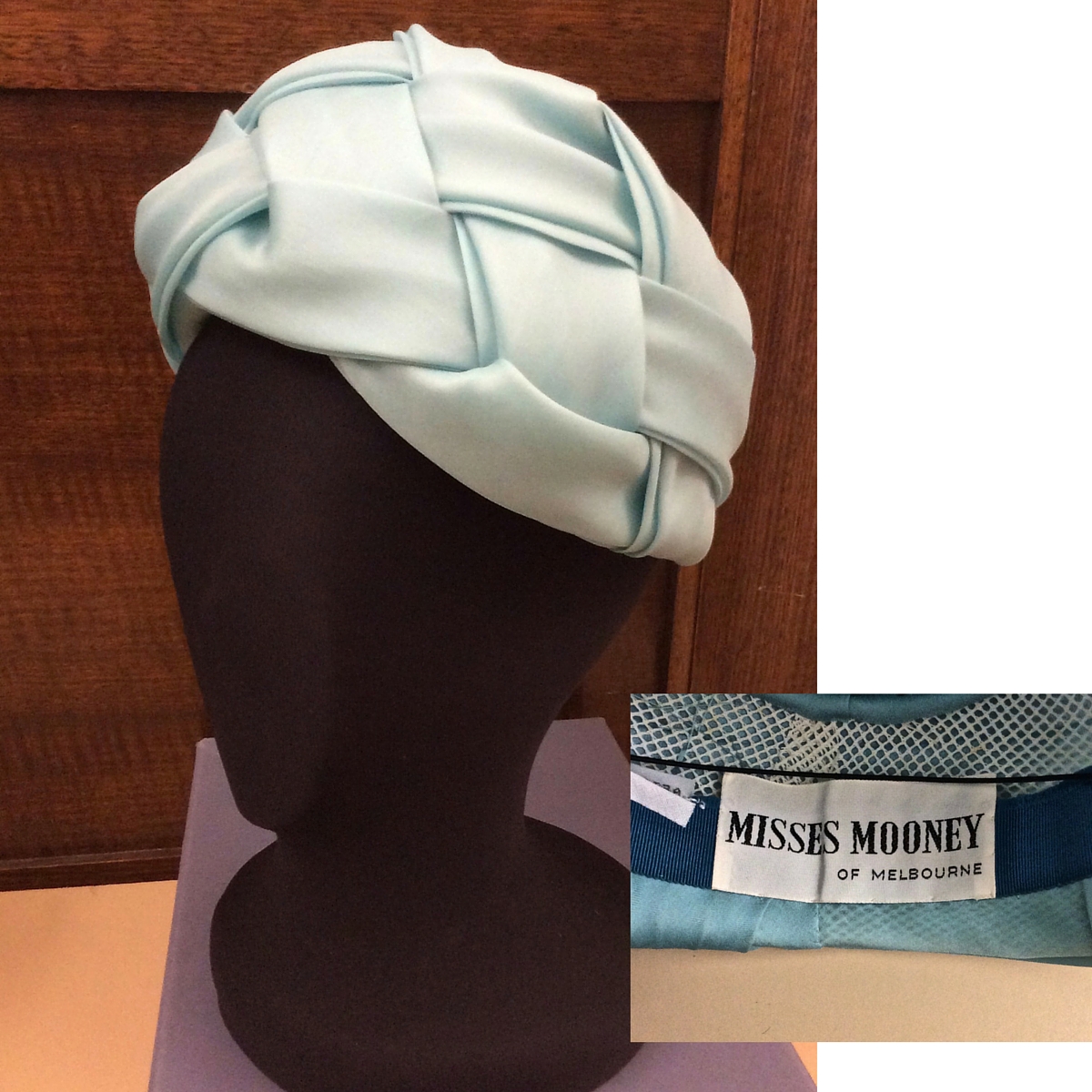 An aqua blue rayon wrapped ribbon turban from the late 1950’s. However, it is of note that the label on the hat looks more modern than the label on the dress. Hence the hat even date into the early 60’s.  Please note the colour in the label image is more accurate.

The fashion label Misses Mooney was operated by two sisters from the premises at 189 Collins Street Melbourne. The label was established in 1932 and closed in 1972. It is unclear if it operated from this address for the entire time. There is little information available regarding this label, although at that time this part of Collins Street held a thriving industry of dressmakers and associated trades. The Powerhouse Museum in Sydney holds a Misses Mooney ensemble with some useful contextual information here.

The following are some points of interest from her history from her time working for the Mooney’s c1944 – 46. 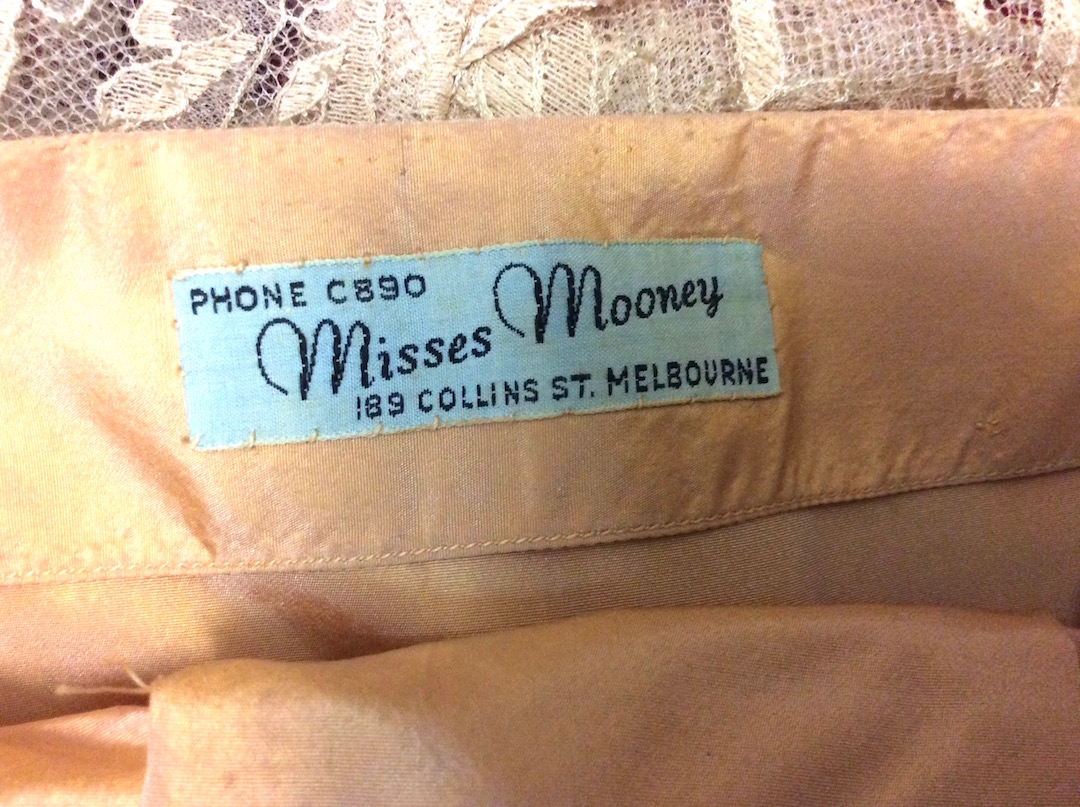 A stunning cream silk and lace creation of pleating, ruching and delicate construction this Raoul couture dress is just lovely, and rather tiny. Raoul couture was a highly respected fashion house based in Flinders Lane, Melbourne from c 1955 until 1963. Head designer Leonard Legge later worked for another prominent Australian designer Prue Acton. 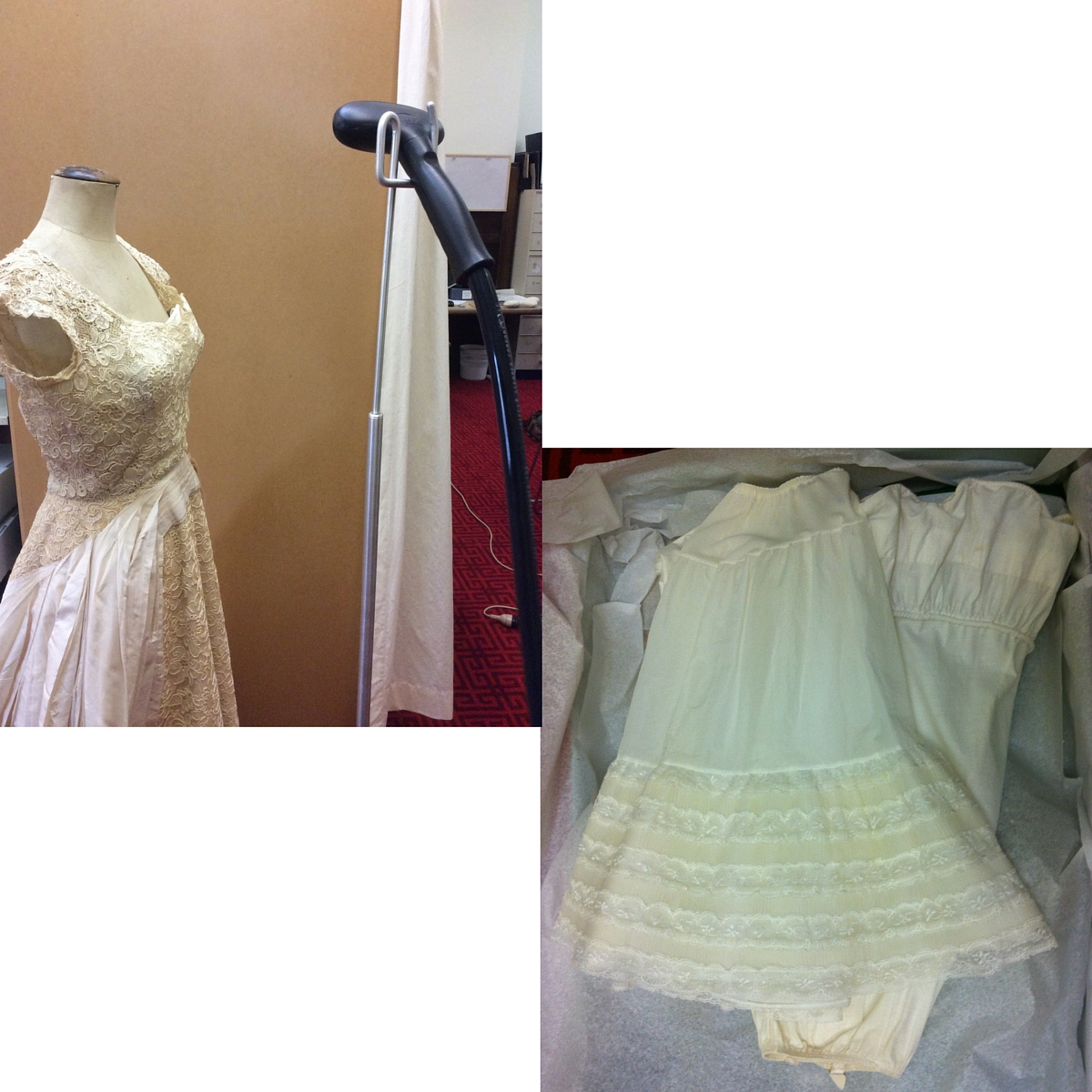 Very carefully steaming the Raoul Couture dress prior to transportation. It will require further attention prior to dressing the mannequin. Three vintage petticoats for layering under the dress. 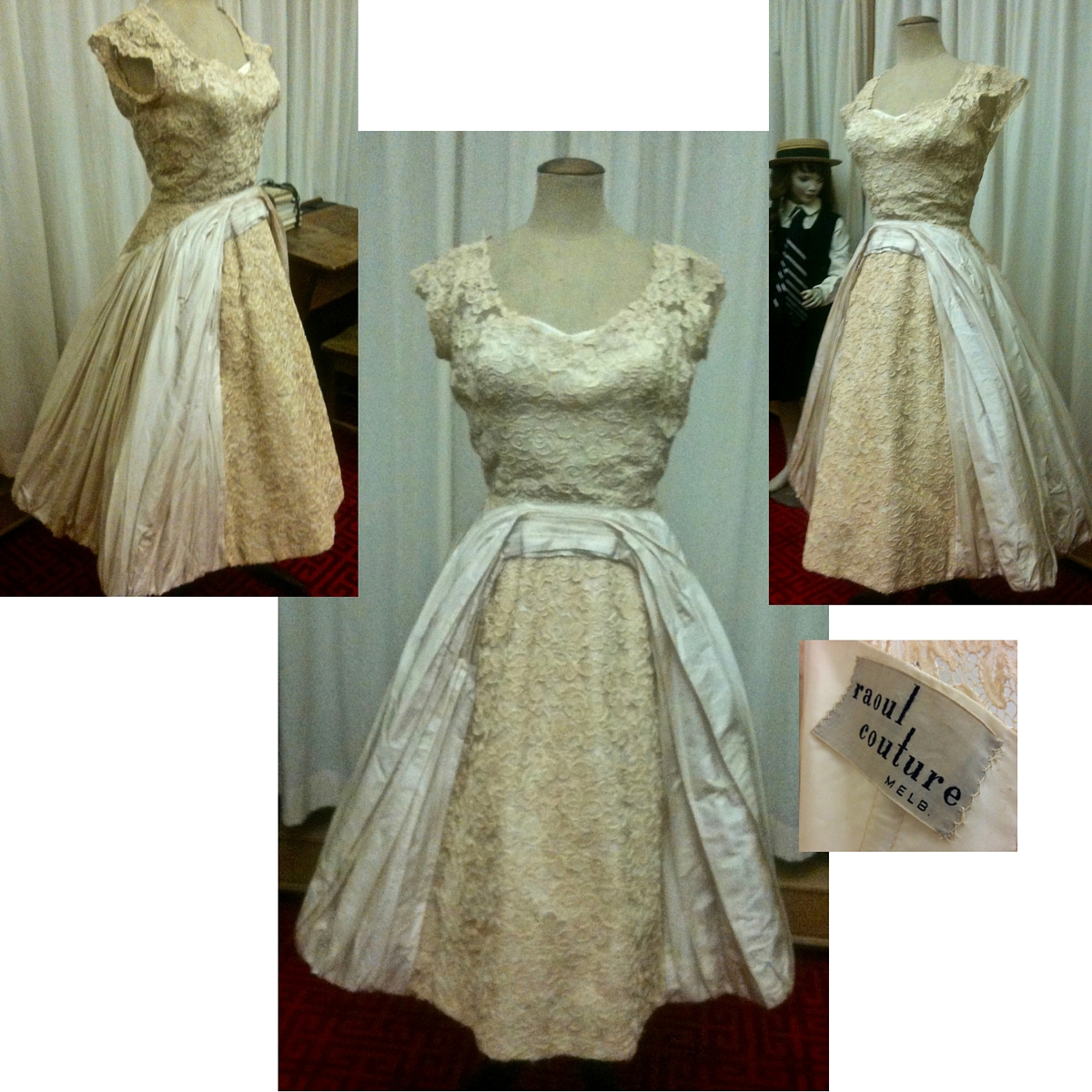 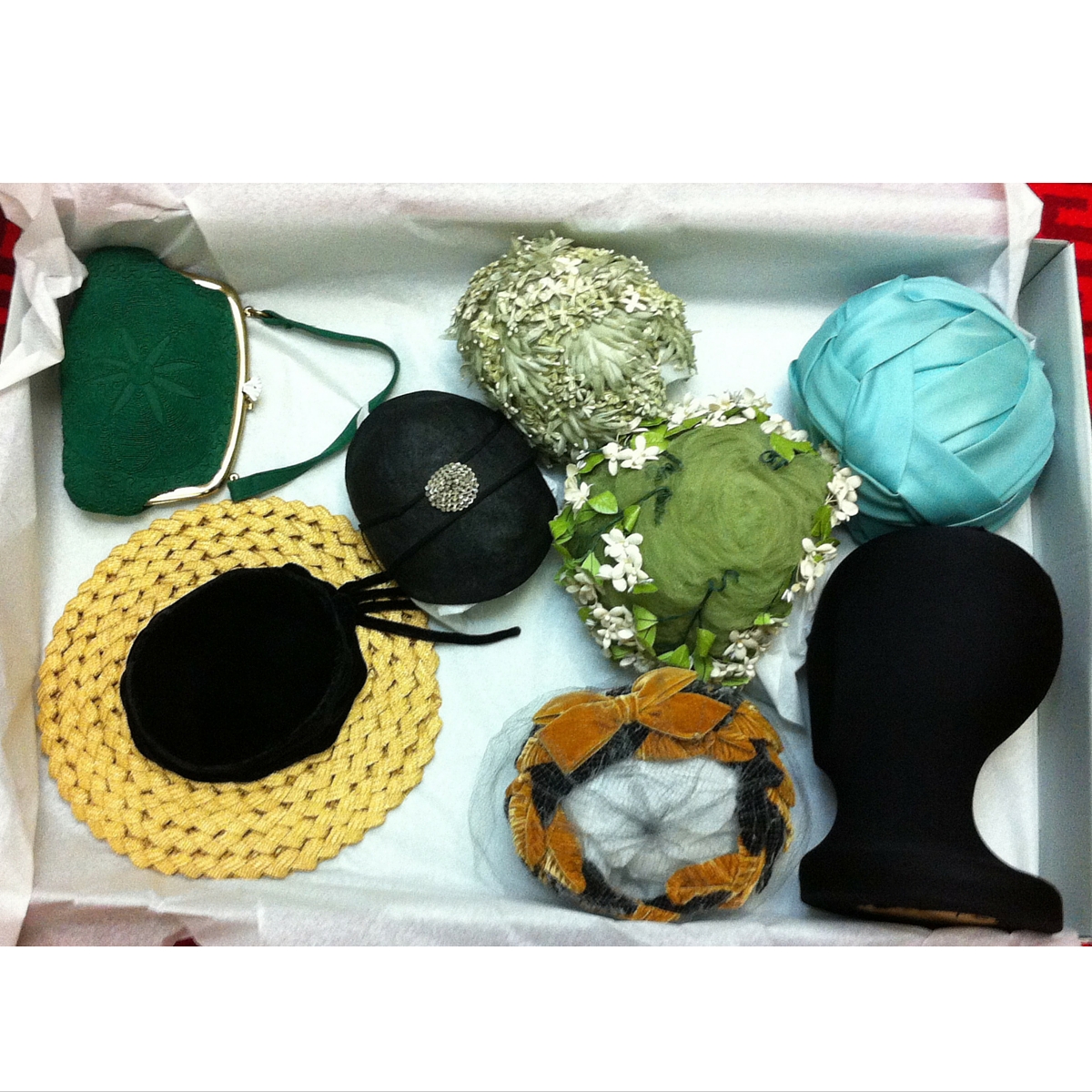 All boxed up and ready to go.