In difficult times the need for love and romance prevails, offering hope and distraction from events. Family and community are an important source of support and sharing of resources.  Worn by three Brighton brides between 1941 and 1948, this wedding dress holds a local story of love, family and sharing in the midst of wartime austerity. 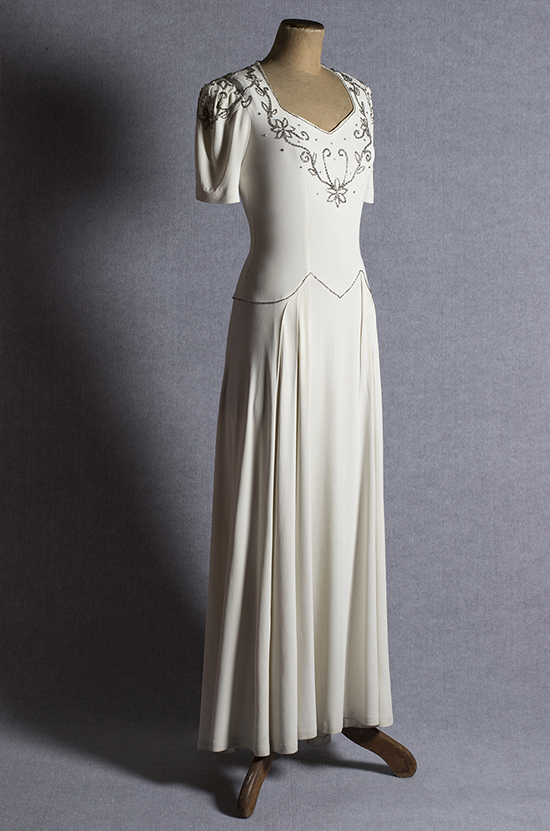 War and austerity at home

From September of 1939 Australia was once more at war. The memory of the First World War remained close and since Armistice in 1918 the Australian people had experienced only a brief period of joy and prosperity before descending into an economic Depression that had caused extensive hardship for many. While the Australian public was spared rationing longer than their British counterparts, by June of 1942 the Australian Government introduced austerity measures, rationing key commodities to ensure their availability for military needs and fair distribution amongst the population.

When the public first suspected rationing may be on the horizon, stores were besieged with shoppers intent on stockpiling supplies. Those with financial resources to hand were best positioned to stockpile. Those with well stocked wardrobes were also better placed to make selective use of coupons. 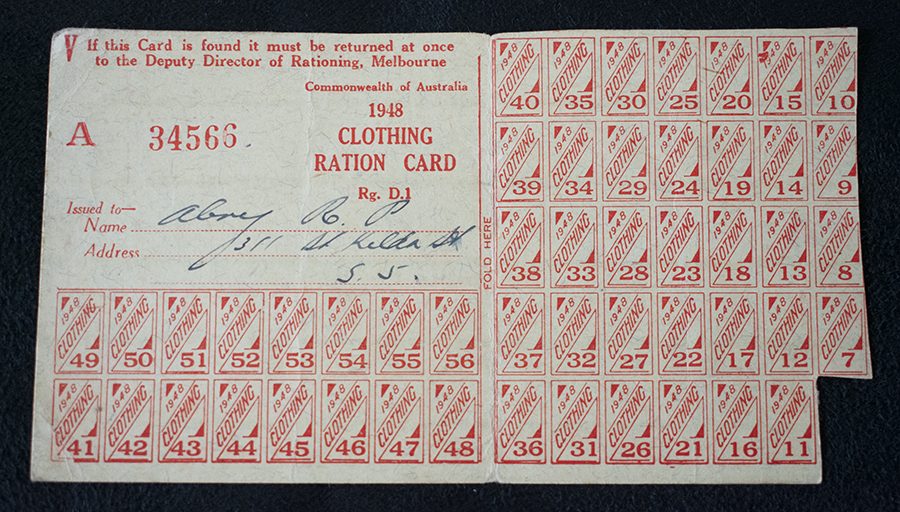 Along with rationing of supplies, the National Council of Clothes Styling was established to regulate the design of clothing items in order to minimise fabric usage, reserving stocks for war requirements. These doctrines included a maximum length allowed for skirts and bans on voluminous sleeves and accessories other than belts, with belt widths limited to less than 5 centimetres. Buttons, cuffs and tails were also restricted. 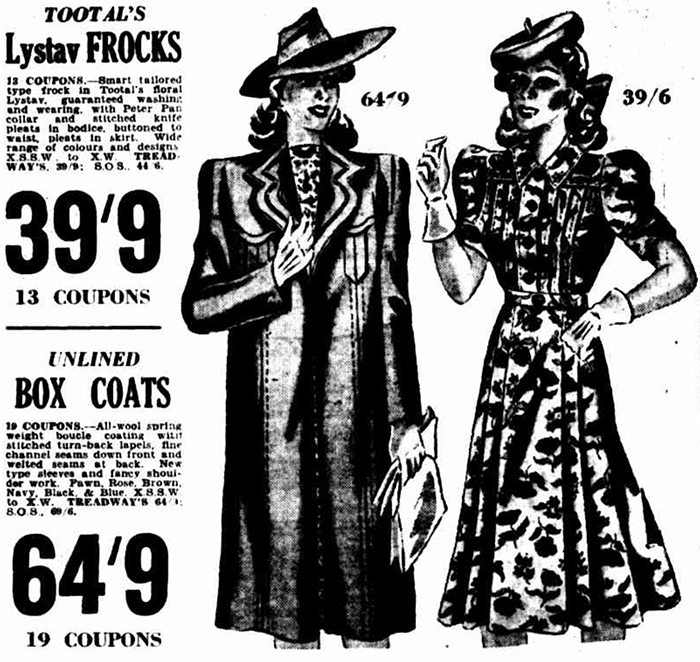 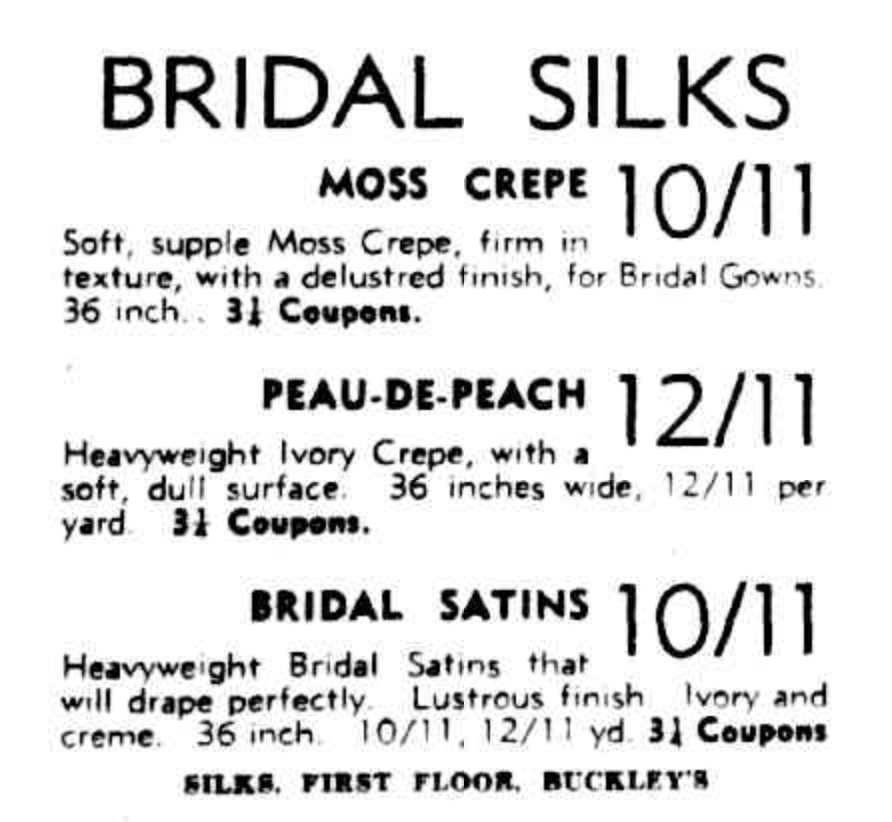 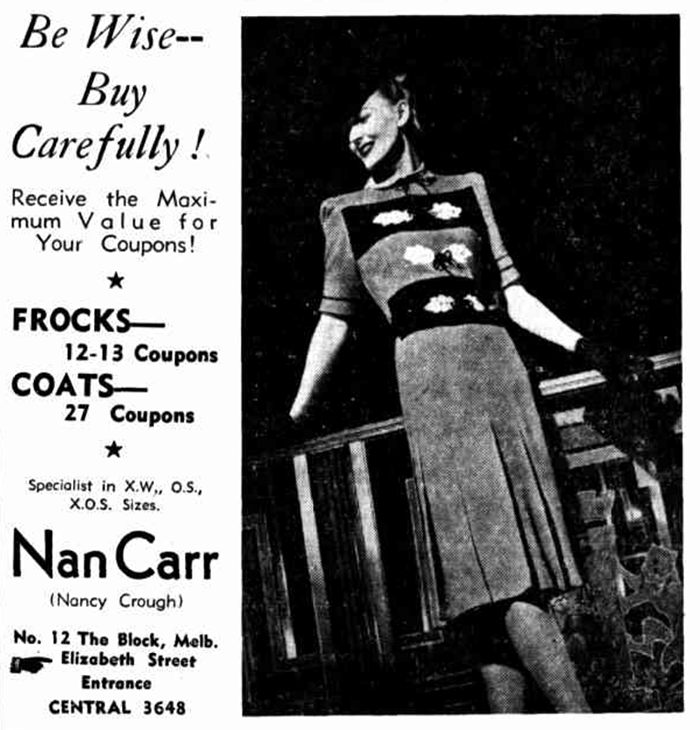 Once your ration was spent, the only options were to “make do and mend”, swap, loan or source goods via the black market. This impacted behaviour and expectations, with people forced to adopt more flexible and austere clothing conventions.

Births, deaths and marriages carry on despite world events, in good times and bad. Romance is a great distraction from the toils of the everyday, and in difficult times a sense of hope, contribution and community can help to carry people through. War brought an upsurge in marriages, with many couples keen to seal their commitment prior to the groom’s departure for military service or whilst on leave from service. Love, whether it be among friends, family or romantic partners, is a key part of human nature and the glue that bonds individuals together.

Pre-rationing, brides were still seen in more opulent gowns. These two gowns in the Brighton Historical Society collection were each worn twice, with the first wedding taking place before rationing commenced and the second after. The stylistic details and textile choice are typical of more opulent pre-rationing wedding fashions. 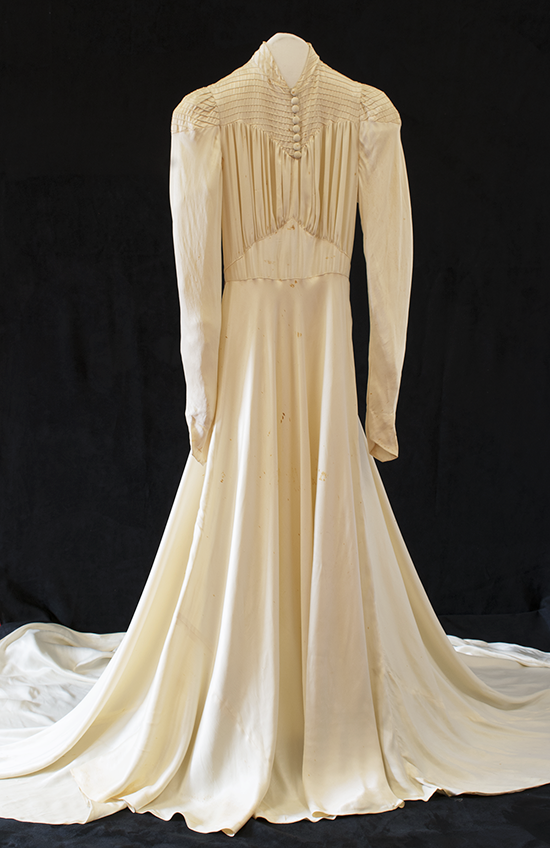 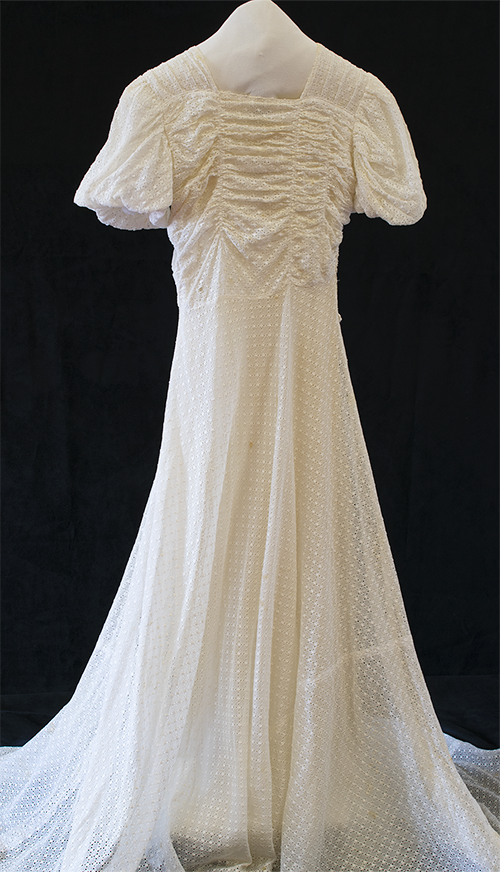 These three brides would seem to have enjoyed a loving family relationship as they participated and shared in each other’s weddings. Bid, our first bride, married in 1941, two years after the beginning of the war but prior to the beginning of rationing. Despite this, Bid’s dress is notably understated, with an elegant simple bead embellishment to the heart-shaped neckline, modest fullness to the head of the sleeve, a slim silhouette, shorter length, and no train. From our archival photos we can see that Bid wore a floral hair piece, veil, simple pendant necklace and elaborate bracelet, and carried a simple elongated bouquet. Bid’s twelve-year-old niece Jocelyn, daughter of her sister Doreen, served as her bridesmaid.

Bid’s brother Carl was next to be married, in 1944, to his Rangoon-born fiancé Jocelyne. Burma, a British colony at this time, saw considerable fighting between British and Japanese forces after the Japanese invasion in 1942. This conflict may have brought Jocelyne and Carl together in Australia. For her wedding Jocelyne wore Bid’s gown, along with a veil, hair piece and bouquet similar to Bid’s. She accessorised with a simple Christian cross pendant and long white gloves. Bid and Carl’s niece Jocelyn, now aged fifteen, served as bridesmaid to her uncle’s bride.

By the time it was Jocelyn’s turn to marry in 1948, the war had ended three years earlier and rationing was either soon to end or recently ended. Whether it be for fiscal reasons or sentiment, Jocelyn chose to also wear Bid’s gown for her wedding. Jocelyn’s choice of pearls and long white gloves is in keeping with fashions heading into the 1950s.

Adapted from page design for www.brightonhistorical.org.au by Jessica Curtain

Robson, Jennifer, “Buttonholes for a Royal Bride: What it was like to help make Queen Elizabeth’s 1947 Wedding Dress”, Time Magazine, 19 November 2018, http://time.com/5457007/queen-elizabeth-wedding-dress/.

“The Queen’s wedding and coronation dresses to be displayed together for the first time to mark Her Majesty’s 90th birthday”, Royal Collections Trust, 27 May 2016, https://www.rct.uk/about/news-and-features/the-queens-wedding-and-coronation-dresses-to-be-displayed-together-for-the#/.