Contemporary material culture reflects the world in which it exists. World events, technological advances and exposure to new ideas all influence social change and consumer choice. We reflect upon our own experiences and align ourselves with selected ideas, people and communities, ultimately creating a sense of connection to our world.  These individual actions collectively form recognisable trends, tribes or styles which can be given an identifying name, such as the one we have here: Art Deco. 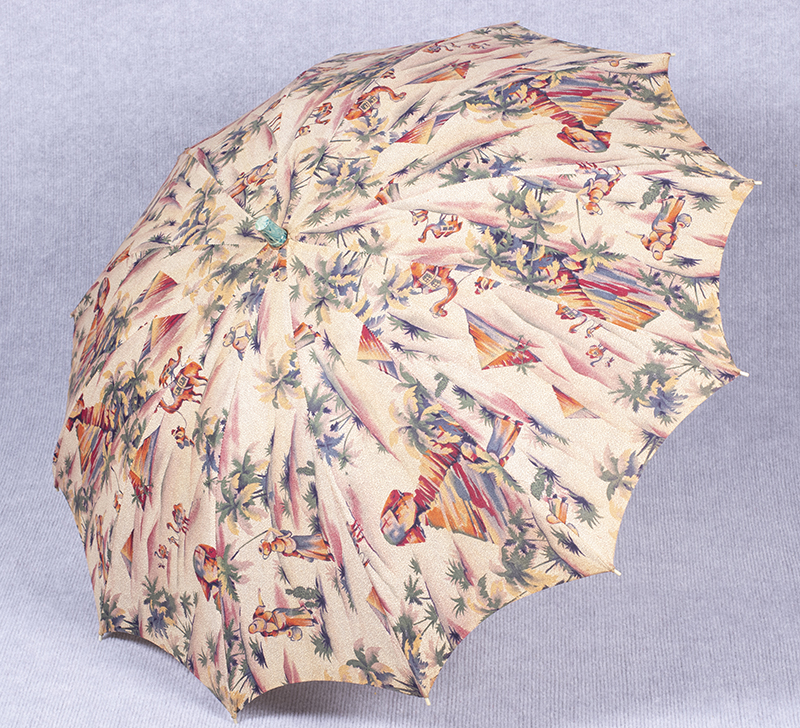 An item that speaks of world events and local fashions of its time, this circa 1922-1935 parasol in the Brighton Historical Society collection features images of the Giza Plateau, including the Great Sphinx, pyramids, palm trees and camels.  It tells a story of the changing society of the twenties and a burgeoning Egyptomania that would feed into the wider Art Deco movement. 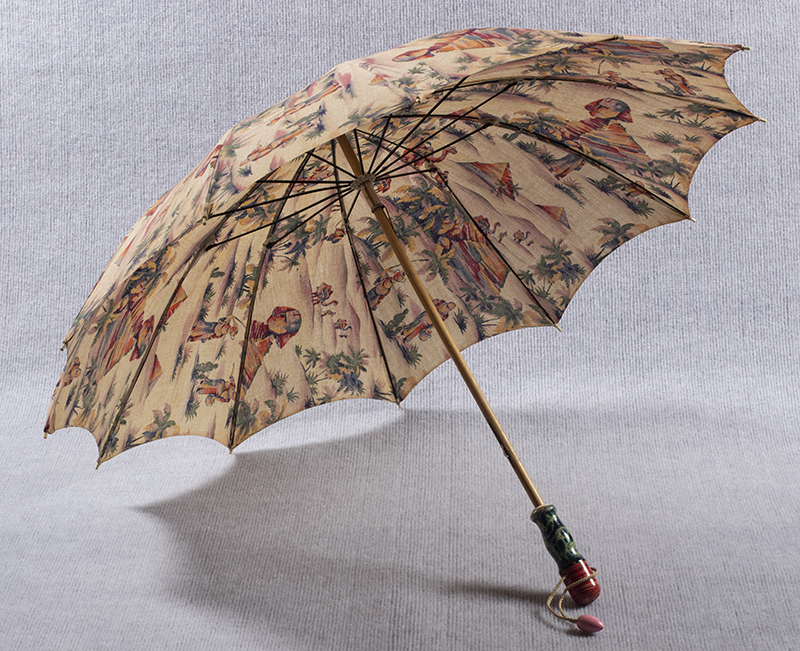 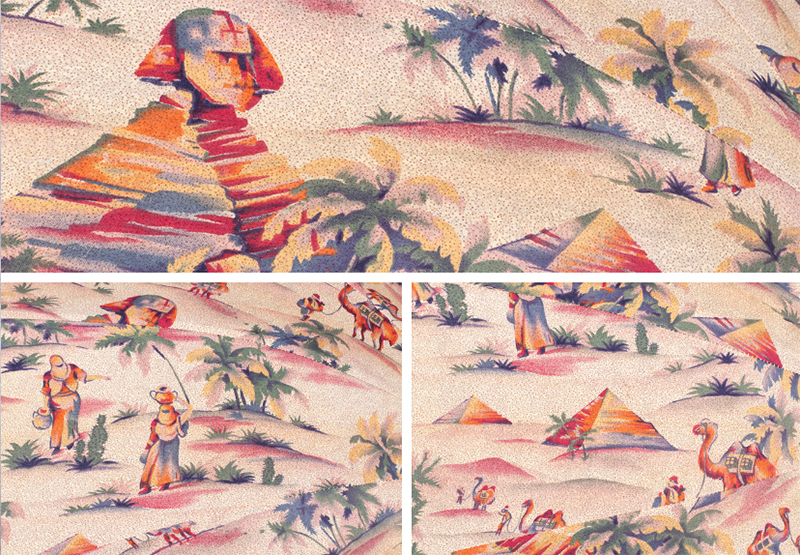 In Europe and Britain in the early 19th century, tales and artefacts from new territories and ancient histories were highly prized. Archaeological work was taking place in the desert sands of Northern Africa and in 1817 efforts were made to investigate what lay below the shoulders of the Sphinx of Giza. This battle was lost to the desert until Egyptian archaeologist Selim Hassan successfully excavated the site between 1929 and 1939, revealing the Sphinx’s lion-shaped form. Tourism to Egypt was popular, but with the advent of World War One these activities ceased until peace resumed in 1918.

North Africa was soon to receive visitors of a different kind, as many troops served in the Middle East campaign, with training and operations in Cairo, the Suez Canal, the Sinai Desert, Palestine, Gaza and Jerusalem. The opportunity afforded by war to travel abroad was initially seen as exciting despite the realities faced. Souvenirs were popular among servicemen, who sent photos, postcards, embroidered textiles and messages  to loved ones in Australia. Images of soldiers posing with pyramids, the Sphinx, national flags and local people and animals were shared with people at home, increasing awareness and interest in exotic foreign cultures and far off lands. 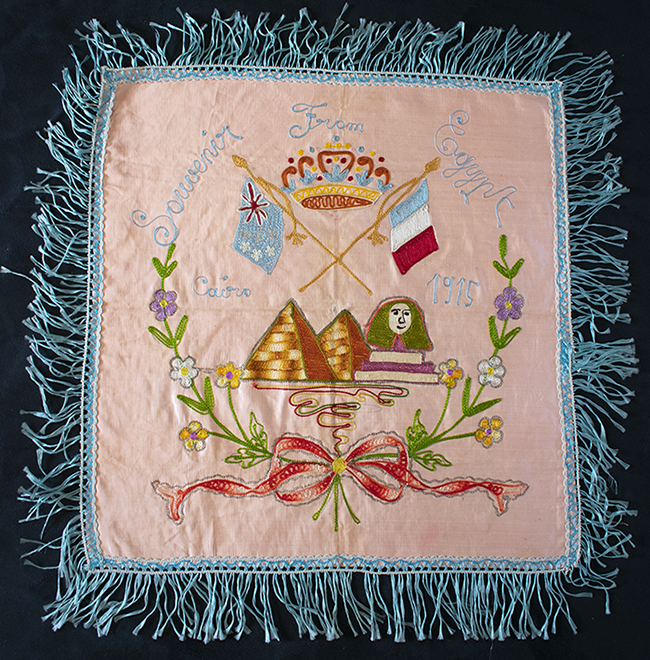 Celebration of life and newfound freedoms

With so many men away, World War I brought new opportunities for women on the home front. Women stepped outside their domestic duties and into roles traditionally held by men. This autonomy and responsibility increased self-confidence and a sense of freedom which was not readily relinquished at war’s end. Having experienced great loss, and now living in a society with a dearth of young men, many women’s perspective on life was altered. A sense of living for today prevailed and amid newfound peace, prosperity and income to spend, interest in fashion and fun was high. Accessible public transportation, automobiles, dancing, cigarettes, alcohol and outdoor pursuits such as swimming and sunbathing fuelled the burgeoning youth culture. 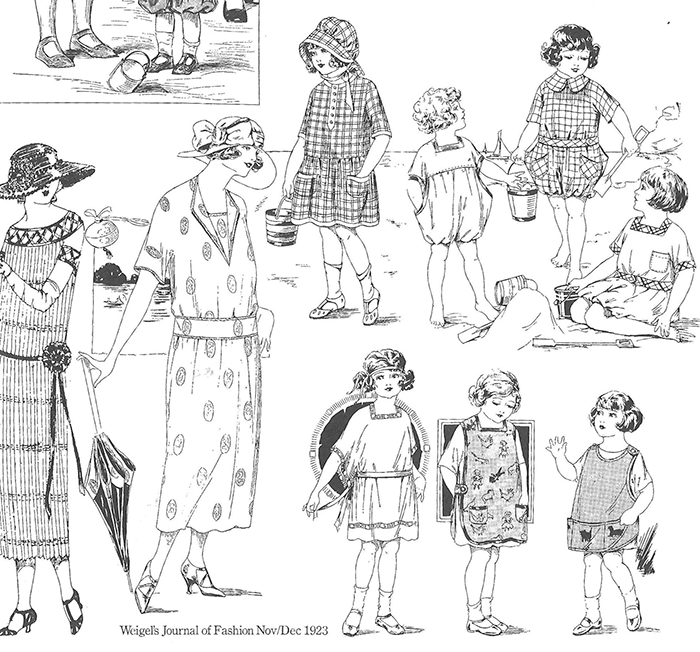 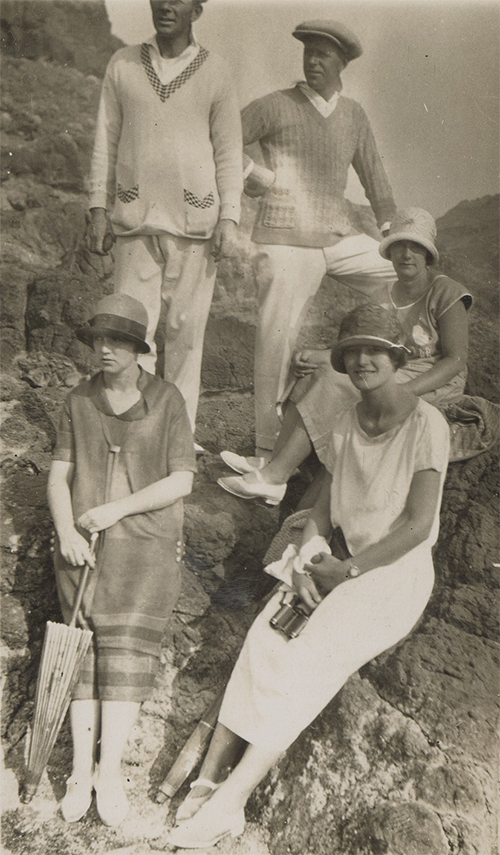 A time rich in culture and design

Tourism was also flourishing. Travel to North Africa increased with the discovery of Tutankhamun’s tomb by Howard Carter and Lord Carnavon near Luxor, Egypt in 1922. This spectacular find sparked a new wave of Egyptomania, a fever-pitch interest in all things Egyptian and Egyptian-inspired. Tourists would typically tour Cairo and its museum, visit the Great Pyramid and the Sphinx on the Giza Plateau, and then make their way south along the Nile to the Valley of The Kings and Tutankhamun’s tomb.

Not only was Egyptomania high, prosperity and a rapidly widening spectrum of cultural influences created a heady mix of stylistic elements, which came together and developed into the recognisable style of Art Deco. Borrowing freely from the Orient, Eastern Europe, and North Africa, the materials and forms of the machine age, art movements such as the Bauhaus, abstract art and jazz music, Art Deco carried on despite the economic crash of 1929 and the subsequent Depression.

Egyptian-inspired imagery and motifs were prevalent in many western goods.  Parasols were standard use in the sun and were even sold beachside at times. At Brighton, swimming and sunbathing were increasing in popularity. Sea baths now offered separate enclosed swimming for men and women, swimming training and competitive events. Leisure time on the beach was a popular pastime with people travelling across Melbourne facilitated by easy access by car and public transport. Brighton was establishing itself as a popular destination.

While we do not know the provenance of this parasol, its presence in the BHS collection indicates that it was used locally and is indicative of an awareness and interest in global events or potentially travel taken to exotic locales.