For those living through the World Wars and financial hardship of the early-to-mid twentieth century, hard work and sacrifice were all too familiar. Through its design, wear, tear and repair, this 1940s grocer’s dustcoat innately reflects the interwoven world events and their impact on the everyday lives of ordinary people.

An item distinctly indicative of its time, through its scars it tells a story of a changing retail landscape, life during a difficult period in Australian history and the role of ‘uniform’ in communication of professionalism. 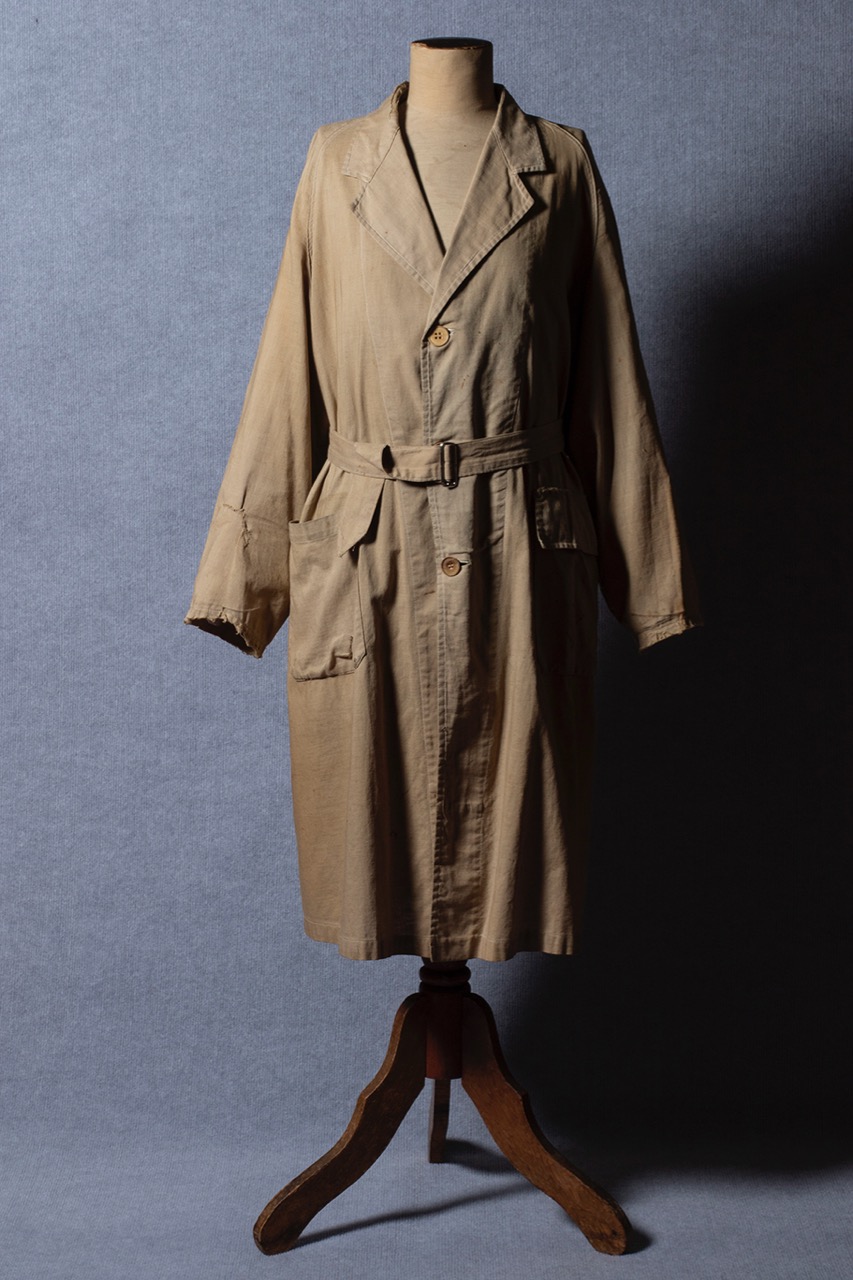 Frederick Alister Jennings, 1909 – 1970 was born in Nagambie, Victoria on 6 August 1909, later moving with his family to Brighton, where he met his future bride, Margaret Jean Hughes.  The couple were married in December 1934, both aged 25, but lived separately for several years until Frederick moved into Jean’s parents’ home around 1937.

These were difficult times.  The Wall Street crash of 1929 had sent Australia plunging into an economic depression from which it would take almost a decade to emerge, with unemployment peaking at 32% in 1932. 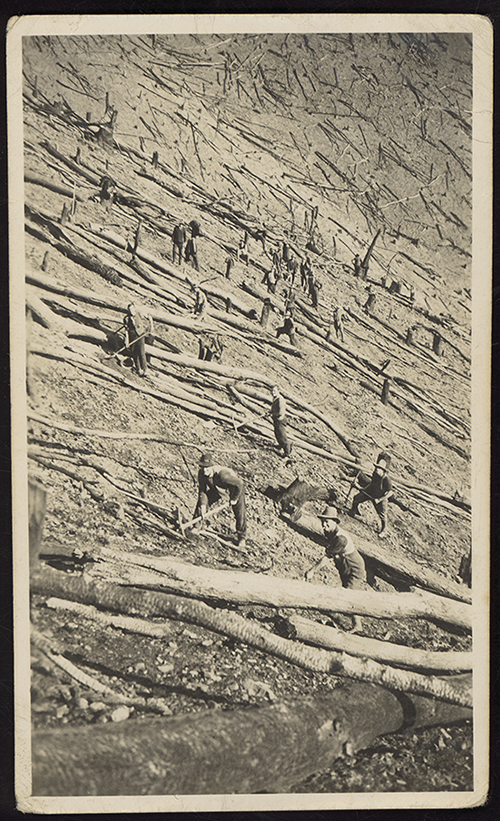 In the midst of this, the world went to war.  Like so many Australian men, Frederick enlisted in the military, serving in the Royal Australian Air Force from 1942 until 1945.  Following his discharge, he worked at his father-in-law William Gardiner Hughes’ grocery store at what was then 510 Point Nepean Road (now Nepean Highway) in East Brighton, near Centre Road.

For those fortunate enough to return from service, productive work was an important aspect of recovery from the trauma and horrors of war.

William Hughes was familiar with the hardships of war.  After being declared physically unfit for military service in 1916, he made multiple petitions to the City of Melbourne requesting permission to provide for himself through the sale of fruit and flowers in central Melbourne. In his letters he requests a “small rental”, promising cleanliness and respectability. His letters lay bare his difficult position, seeking to provide for a young family while contending with chronic health issues that prevent him from undertaking laborious work. 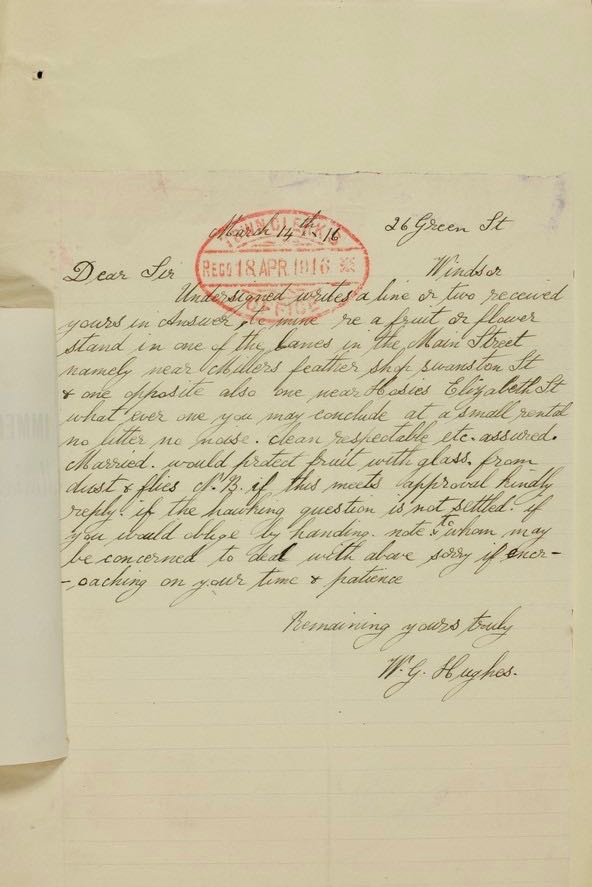 His plea was denied. Nevertheless, he found ways to manage and, by 1941, aged 65, he had purchased the Point Nepean Road store from grocer D. H. Corstorphan. At the time it was part of a row of shops, including an ice works, service station, butcher, fruiterer, ladies’ hairdresser, bank, post office and a second grocer.

Wartime rationing was lifted in 1948, and in the subsequent years Australia saw renewed prosperity, bringing great change, including to the world of grocery retail.

The family sold the grocery store around 1951-55, by which stage William Hughes was in his late seventies. Frederick, now in his mid-forties, appears to have returned to his pre-war occupation as a commercial traveller, remaining in Brighton until his passing in 1979, aged 70. 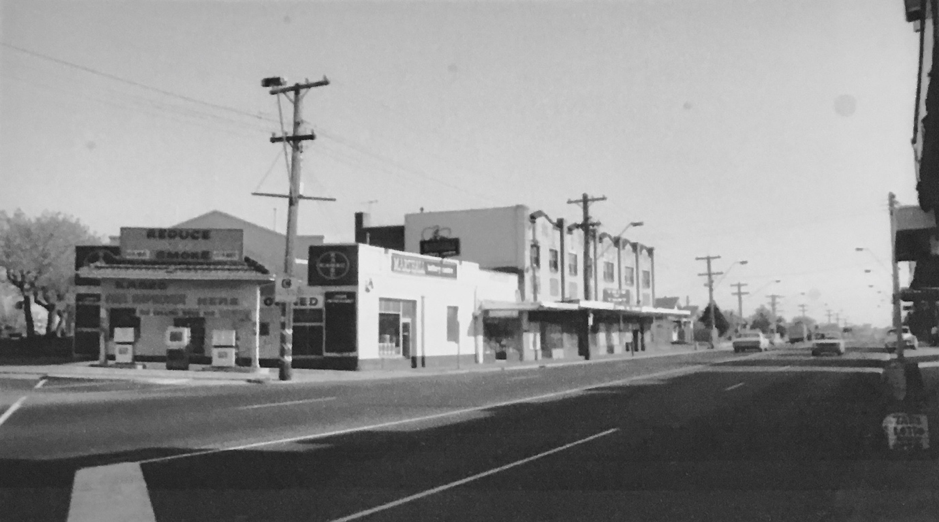 Point Nepean Road, 1979, looking from East Brighton towards the city. A service station stands on the corner of Point Nepean and Centre Roads; William Hughes’ grocery store would have stood next door. Courtesy Ivo Lawson.

These circumstances paint a clear picture of the difficulties many people faced during years of economic depression and World War. The hardship lasted for decades and had substantial impacts on the lives of ordinary Australians.

The grocery business in Brighton

From its early years, Brighton and the land stretching towards the Mornington Peninsula were productive market gardening regions. Point Nepean Road was lined with businesses serving the local community and tram tracks ran down the middle to transport produce from the Peninsula to the central city by horse-drawn tram. The grocery store was a staple business, and many were dotted throughout Brighton. 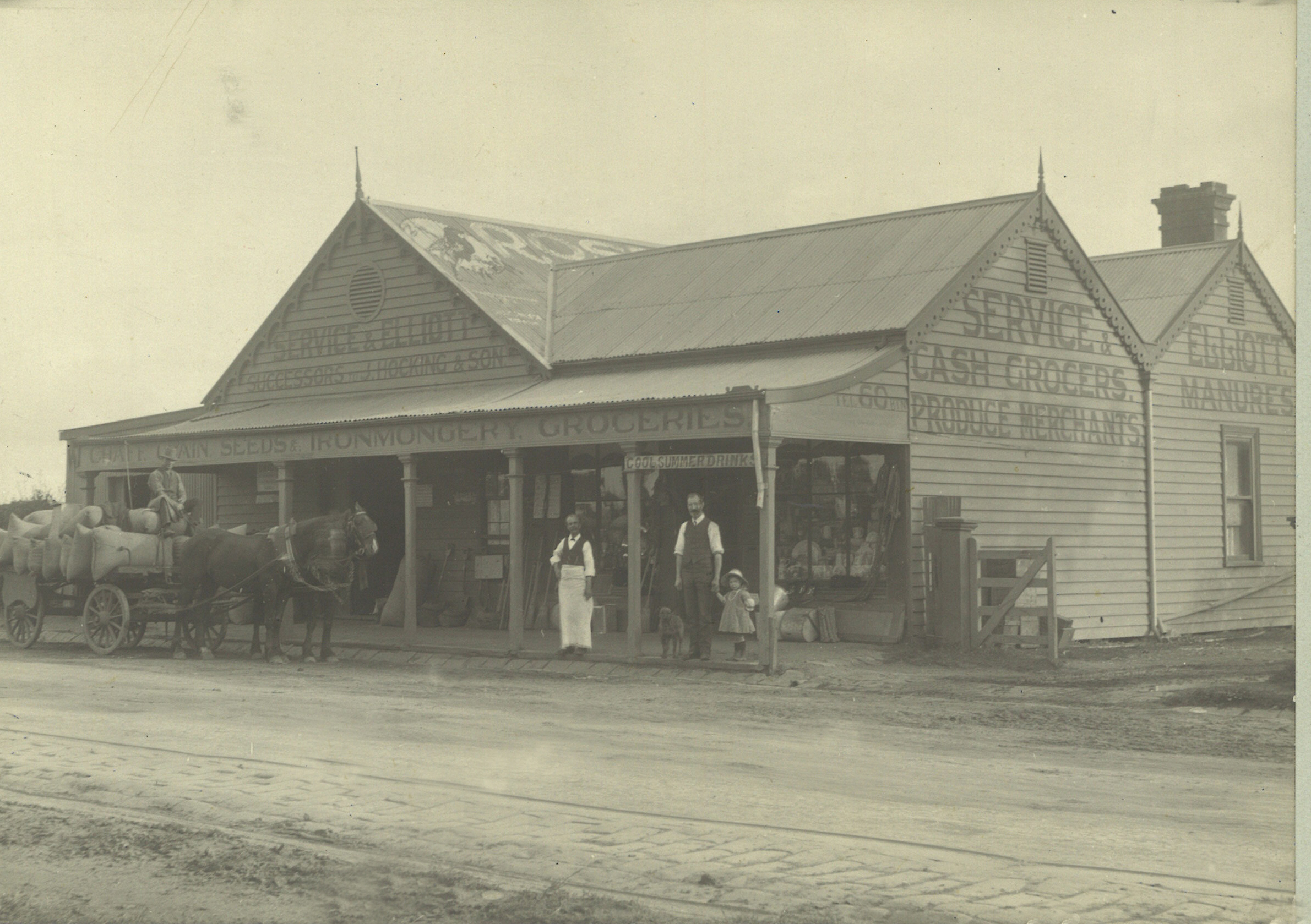 Service & Elliott was a grocer operating on the corner of Dendy Street and Point Nepean Road from 1911 until the 1930s.  As with most grocers of the time, goods were sold over the counter by shopkeepers offering personalised service. The storemen would call on regular customers each morning before returning to the shop to weigh and package each order, ready for delivery by horse and cart in the afternoon.  In addition to household groceries, the shop sold iron goods, coal, seeds, straw, chaff, grain and manure, all in regular demand in an area still dominated by agriculture.

As a child in the late 1920s and 1930s, Mavis Kinsman loved visiting the Glass brothers’ grocery on the corner of Point Nepean Road and New Street. She recalled in 2014,

“There were no self-service stores in those days. You would ask for a pound of butter and there would be this huge slab of butter on a marble slab. He would pat it into shape and that was your pound of butter. Or some biscuits – he had a whole row of tins of biscuits; you would ask for a pound of mixed biscuits and he would go into every tin and get a few out of each. It was a great shop.”

The shop had a high chair where customers could sit while waiting to be served. Because Mr Glass knew Mavis and her family from their church, he would often give her a few lollies in a twist of paper with their order. 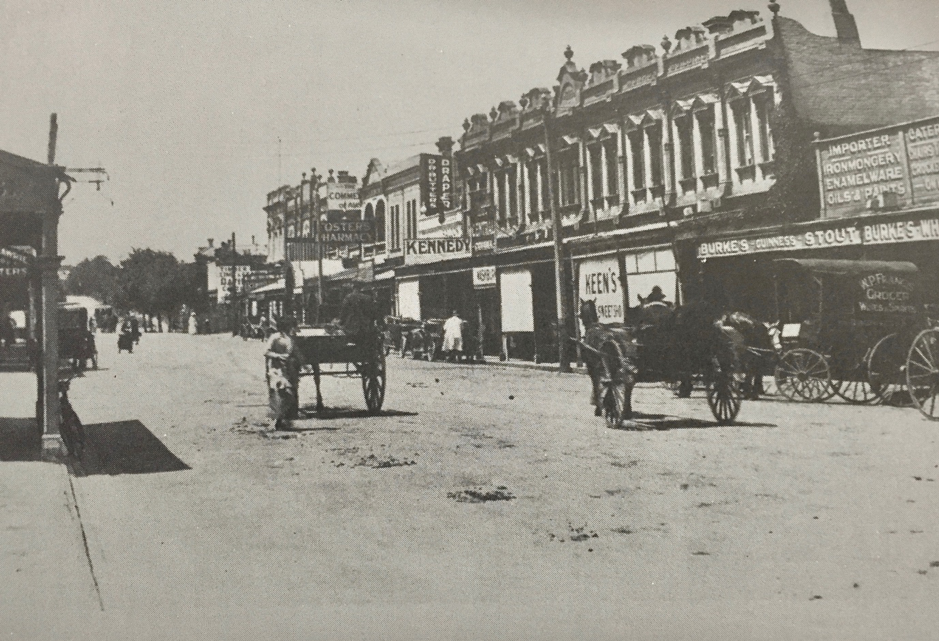 Church Street, Brighton, c. 1921.  A grocery cart can be seen at the far right, outside the grocery business emblazoned with the name “W. P. FRANCIS, GROCER”. Brighton Historical Society. 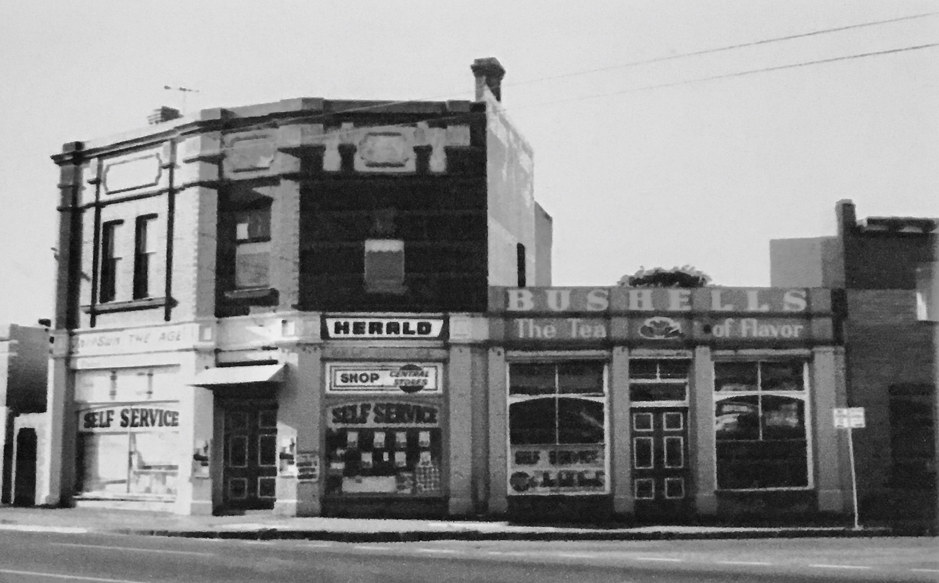 Ivo Lawson also lived in Brighton in the 1930s. Writing in 2004 he recalled the two Blight brothers, who ran a grocery store on the corner of Union Street and Point Nepean Road. They were “tall and thin” and always wore the same thing, “a long white apron that [reached] well below their knees”. He remembered the shop vividly.

“The shop and the Blight Brothers I would guess would be about the same age, the 1880 vintage. The shop was built right on the corner, one window facing Point Nepean Road, the other facing Union Street, the entrance door with a big bluestone step between the two windows. Many years ago, signs for Robur Tea, and Velvet Soap, had been painted on the inside of the windows, and now, after countless washes and cleaning, the background paint had become thin and threadbare and like the rest of the shop, very tired looking.

“The floor was six-inch Baltic pine boards, that over the years had worn much more in some places than others. The big countertop that the Blight Brothers served across was scrubbed almost white. From the twelve-foot-high wooden ceiling hung fly blown signs, advertising tea, biscuits, soap and all manner of grocery lines. They must have hung there for years.” 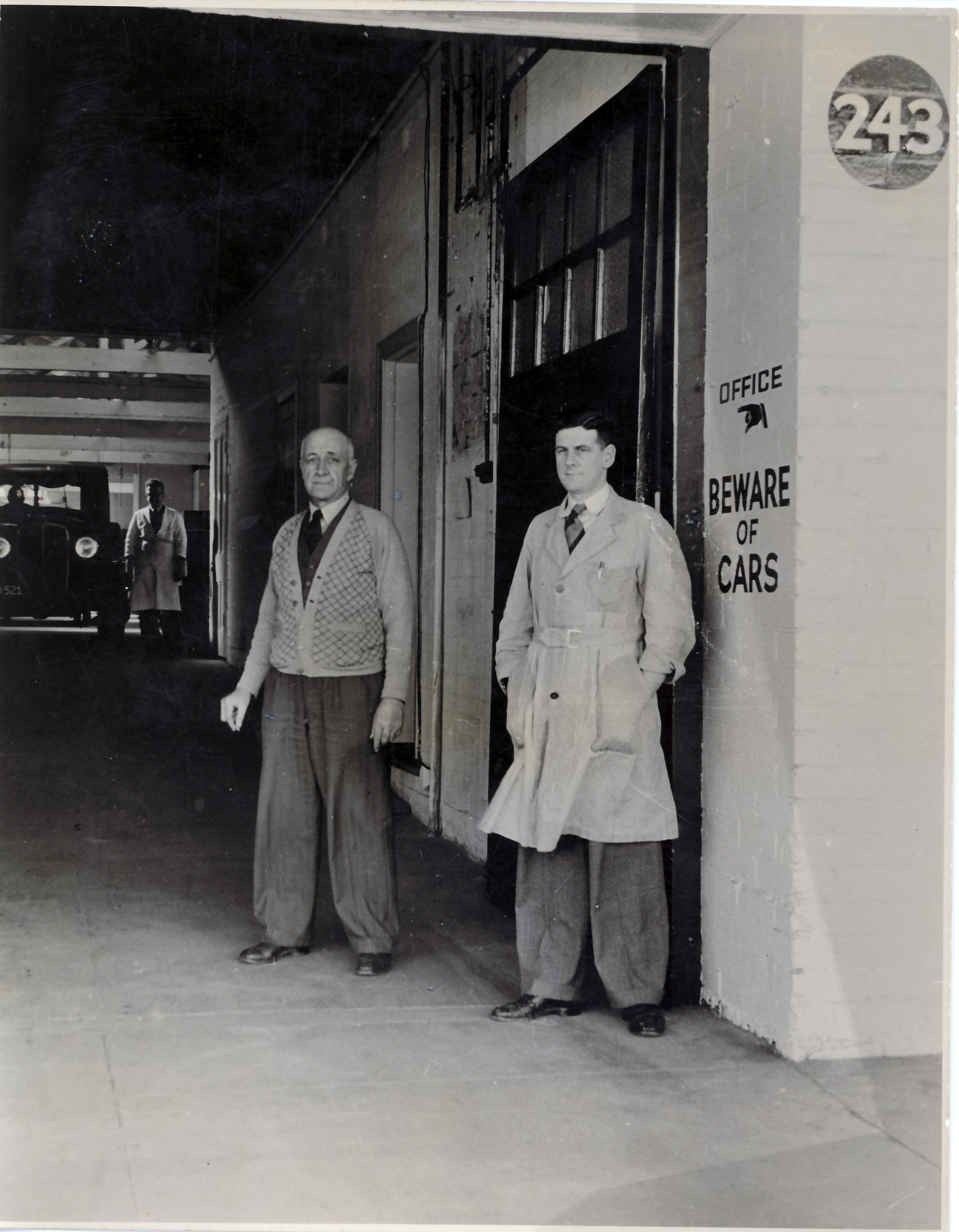 Joe Wood (buyer) and Allen Wood (assistant) in the entrance to the Brighton District Grocers Association, 243 Bay Street, Brighton, 1950. Brighton Historical Society. Joe, as the buyer and manager, wears a professional collared shirt and tie with a knit cardigan and professional but hardy pants. Allen, whose role as assistant clearly involves more outdoor and physical activity such as deliveries and warehousing, wears a dustcoat resembling Frederick’s.

The language of uniform

Grocers, like many skilled professions of this period, had an unofficial uniform of sorts, coded clothing which served to identify them to others and communicate an understood set of values and professional standards.  A pharmacist’s coat was clinically white. Commercial travellers projected respectability with their suits.  Butchers commonly wore a white shirt and dark coloured or white apron, indicating cleanliness and inspiring trust in an area of work where hygiene was important.

Storekeepers and grocers often wore a white or beige coat: white for inside the store and beige when working in the warehouse or conducting deliveries. The coat would be combined with a collared shirt and tie, indicating the professionalism and stature of a businessman combined with the practicality and serviceability of laborious duties.  The wearing of a collar and tie was regarded as important to set oneself apart from unskilled labourers.

Frederick Jennings’ dustcoat speaks to us of his role on the road, visiting customers, taking and fulfilling orders and delivering the goods. 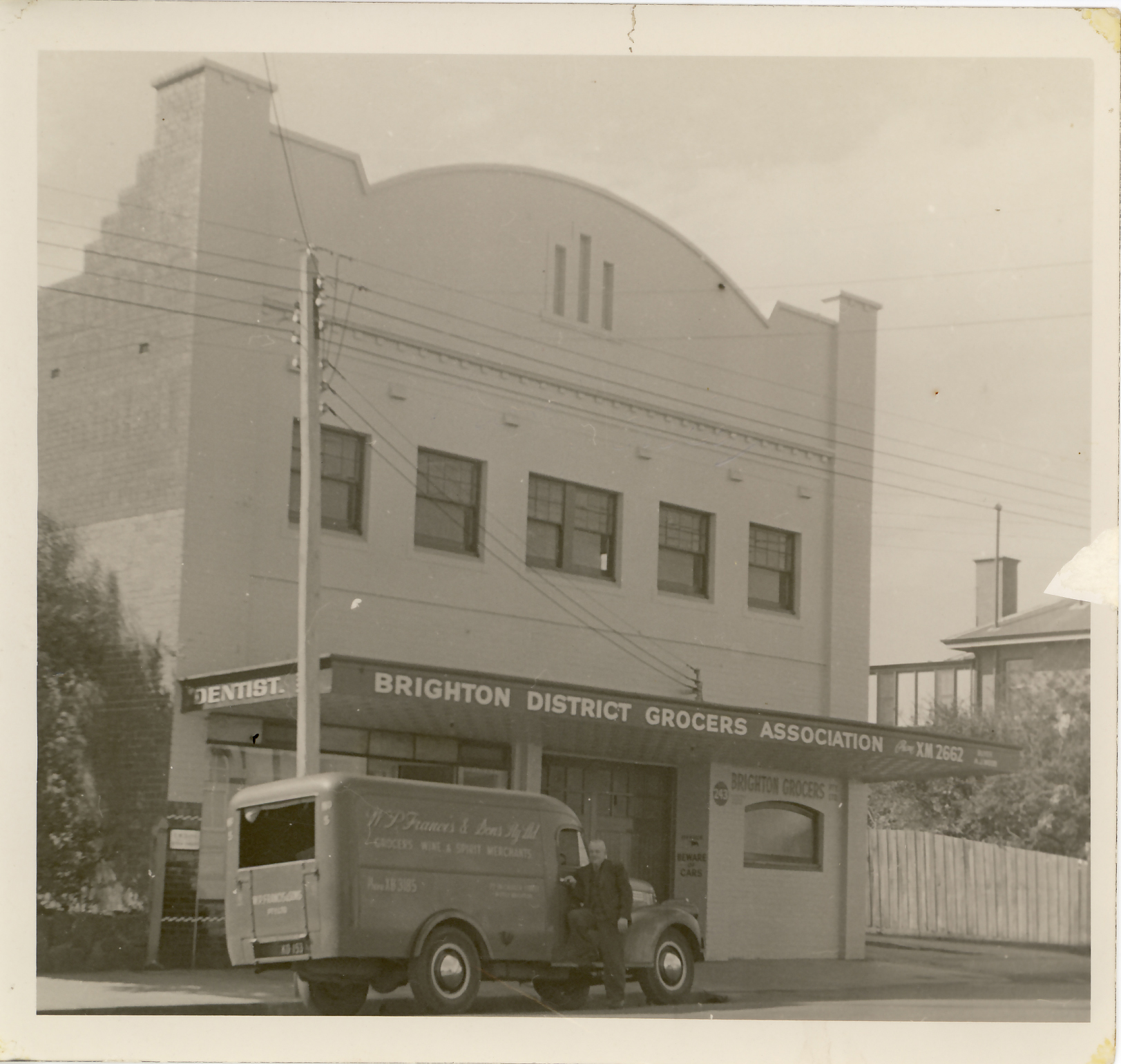 Throughout this period, it was common for small family grocers to band together, forming local cooperatives of twenty to forty businesses, including the Brighton District Grocers Association, which was established in the 1930s. This maximised their buying power and enabled the small businesses to be more competitive against chain stores such as Moran and Cato.  But times were changing.

Self-service stores originated in America in 1916, with the first Australian store opening in 1923.  Transition took time, but by the 1950s the move away from serviced counters was taking hold. Shoppers now loaded trolleys with their chosen goods and queued to be processed by cashiers. No longer were personalised service and the grocer/customer relationship valued in the same way. 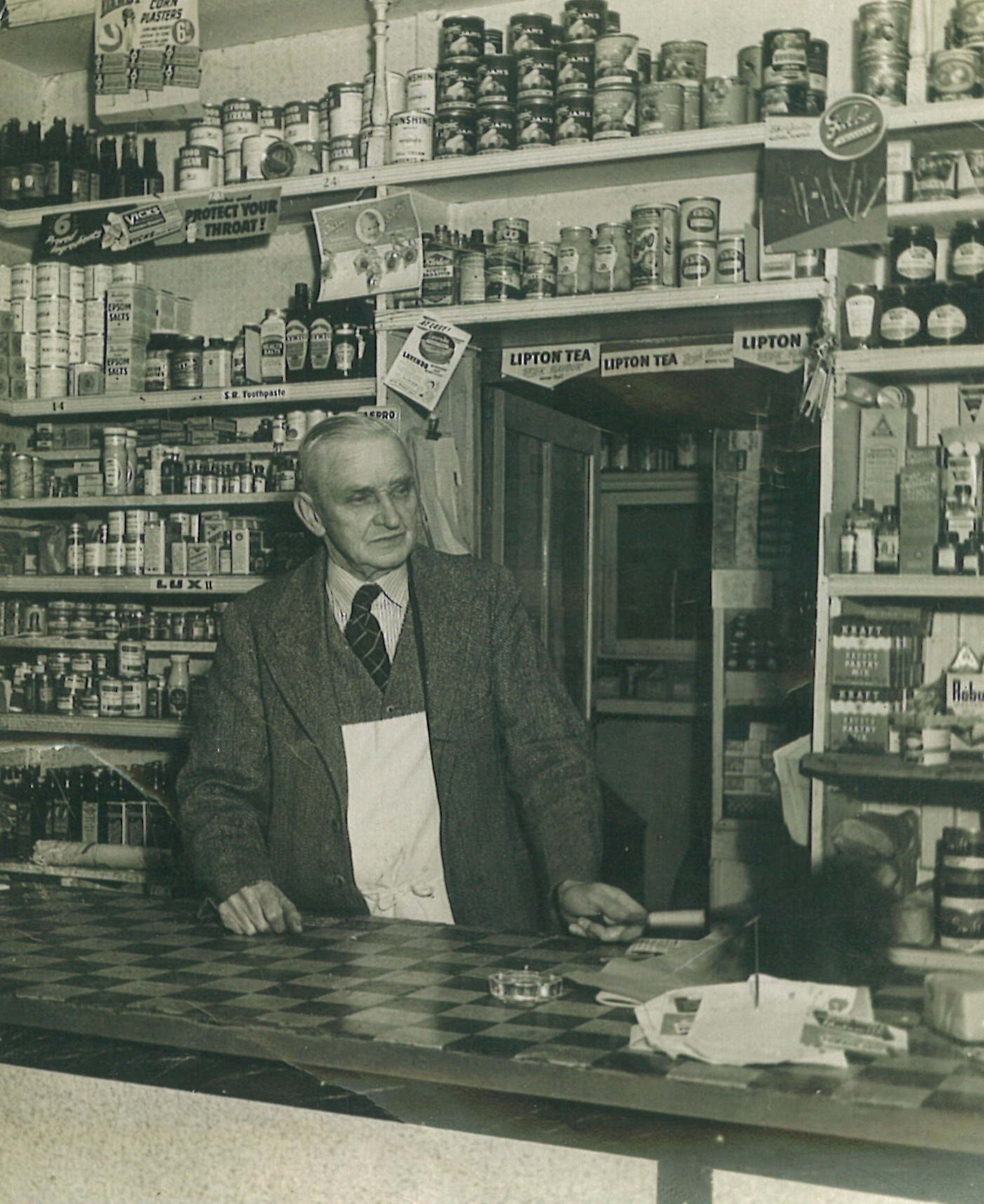 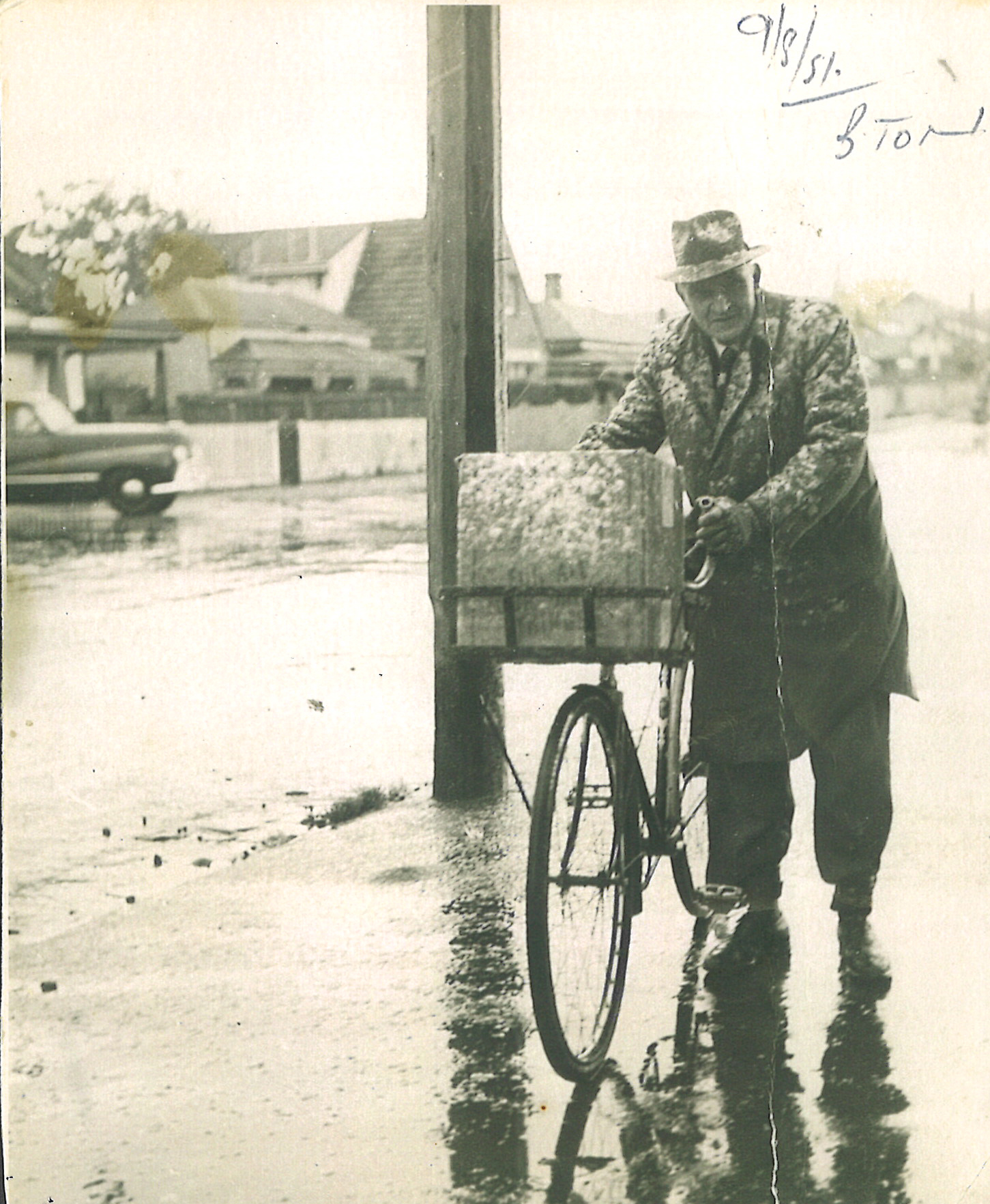 As store environments grew less personalised, breaking down the familiarity of the relationship between customer and service provider, alongside a rise in the culture of individualism, the use of coded clothing such as this dustcoat also evolved. Over the second half of the twentieth century, small local grocers were increasingly supplanted by large self-service supermarket chains, which developed their own corporate branding and uniforms for staff.

The scars of industry, time in service

The wear and tear of this coat speaks volumes of the work that it has seen and the stories it could tell. But what is most striking, and most tender, is the considerable evidence of careful repair, extending the life of this well-used, utilitarian tool of service and toil. 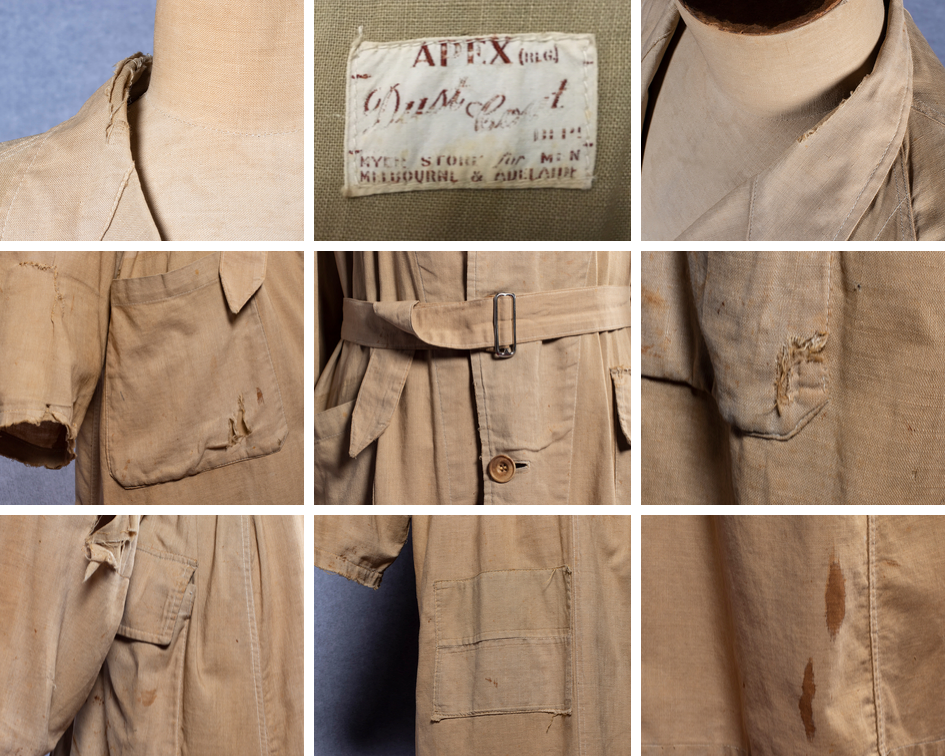 The artefacts of work inform us of the world in which they existed. The industry of work is a vital aspect of life. It gives us purpose, occupation, community.  If we are lucky it also offers prosperity, interest and amusement.

This story was first published at www.brightonhistorical.org.au 20th October 2019

← TEN STORIES from the Brighton Historical Society Collection
Next Post →