Check out these! Aren’t they just gorgeous!

It’s a crying shame that Les Frivolites appears to have stopped making them. Perhaps someone knows more? I so badly want some. Might need to get handy with my leather stock.

These are awesome for the men folk. Though more ankles cuffs than gaiters. Still… Coverings for the legs and ankles, made of cloth or leather and buttoned, buckled or laced at the sides, secured by a strap under the foot.

Worn by men from the end of the 18th century to the early 20th century, the gaiter protects the leg and ankle from the dirt and grime of the wearers environment. Originating in the military, the gaiter was later adapted for civilian use. A carved panel from The Arc de Triumphe, Paris depicting an artistic representation of significant french military history from late 1700’s to mid 1800’s. Spatterdashers or long Gaiters clearly worn by figure in right side of panel.
photo source: http://www.flickr.com/photos/42151532@N04/9290418429/ In the very groovy 1960’s the gaiter was again revisited in vinyl, leather, and cloth, though now for predominantly fashionable reasons.

Well that’s what the powers that be tell me but do you think I could find a suitable image to insert??? No siree.

However we can enjoy this lovely collage of 1960’s footwear… But there are no gaiters there. SORRY!

These ones are far more modern than the 1960’s but I’m imagining something similarly silly but far more groovy. However I imagine that if these… 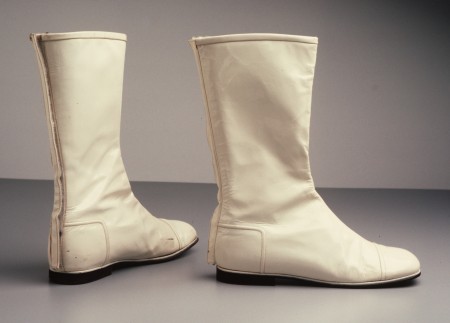 and well, why not? After all they are a most practical item of clothing.

and then there was … Spatterdashes…

As far as I can tell, spatterdashes is just another (although extremely cute and charming) name for gaiters.

High leggings worn by men from the1670’s (so possibly pre dating gaiters) made mainly of leather or canvas and reaching to the knees, they are fastened down the outside of the leg with buttons or buckles.

and now for Spats….

Again, very similar to gaiters however spats are shorter, reaching just over the ankle. Still made of cloth or leather, buttoned at the sides, and held onto the foot by a strap under the instep.

The spat, adopted in the late 1800’s were worn with morning coats generally in white, tan, or grey. oh my goodness, check these out! 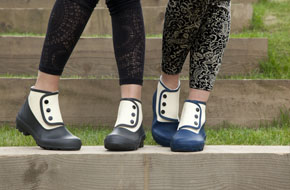 Buy these babies at www.spats-boots.com!

So what do you think? Should we bring the gaiter back?

Fashion. The Ulitmate Book of Costume and Style. by Dorling Kindersley